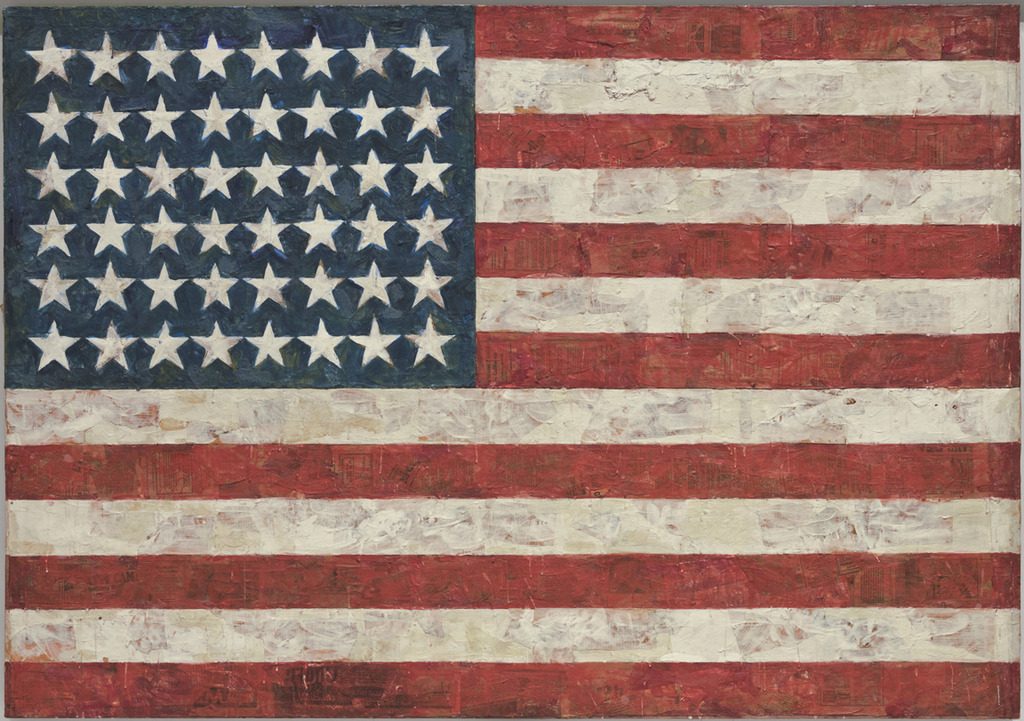 Flag is a painting made by the American soldier at the age of 24 when he got discharged from the American army around 1953. During the time he saw a dream of American flag and was inspired to make the painting out of it. To depict it, he used oil, encausitc and collage of old American newspapers. He chose the cuttings of newspaper deliberately with political or national headlines. Those prints are still visible in the final painting.

In March 2010, the painting was sold for $110 million entering in the list of most expensive paintings and also making his other works valuable as well.

The American flag depicted here is the predecessor of the current version. Alaska and Hawaii got their statehood in around 1959 and thus  there was a need to make a new design (as the stars represents the states, the original flag had 13 stars).

When Jasper Johns made this painting, there were only 48 states and thus it also represents 48 stars as well as the pattern of the old flag. The painting is so identical to the real one that even today critics are confused to decide whether it is a flag’s painting or a painted flag.


Well, the number of stripes remains the same in the respect to the original states.

The colors aren’t as much bright or close to the real flag. Due to the use of oil paint and encaustic colors, the tint has got toned down or dull in comparison of the real flag. That’s one more property which distinguishes the painting from the official one. Another being the use of collage.

Jasper Johns’s oeuvre mainly comprises of different versions of American flags (there are painting with other themes too). Thus, we can assume that this art piece is an ex-army officer’s expression of patriotic emotions.

2 Responses to “Flag by Jasper Johns”