Jargons of the art-world part 5 brings ten more technical terms from the art world including the important ones like the golden ratio, tondo, pyramidal composition and Vincent van Gogh’s four square technique.

During the late 19th century, in French art schools and academies, most of the artists followed the then-popular art-style academism. But, there were some modern or artists with new mentalities who refused to paint only in the conventional academism or impressionism. They started to invent their own styles.

By the other academic artists, they were started to be called as pompier to shun them down. The literal meaning of the term was Fireman and was used pejoratively towards the small bunch of painters who tried “something new”. There happened to be lots of comments and cross-comments between groups and the term pompier got used multiple times and thus those artist’s art started be called as L’art Pompier. In English, it is called as Fireman’s art. Thus, this new art-movement could be just called a nickname of the 19th century French Academism for similar style but with different intentions of painting.

The term is also said to be sued as the pun: pompier also means pompous. Followers of L’art Pompier also released their own menifesto in 1990.

Ajax and Cassandra by Solomon J. Solomon, an example of L’art pompier art

Peredvizhniki was an art-movement started by fourteen students of “Imperial Academy of Arts” in Russia. These Russian students found academy and its teacher’s style too conservative and contraining to further the art-styles and new techqnieus. Therefore, after leaving the academy they formed their own group artistic society. It was called Peredvizhniki. In 1870, the society’s official name was changed to Society for Travelling art Exhibition.

The leading characteristics of Peredvizhniki art were the portrayals of normal lives in the society instead of sticking to the subjects related to the aristocrat families. Also landscapes became their focal points without the restrictions academic rules.

Later on many artists joined the community. And thus, most of the famous paintings from Russia came from this community. Such as, Morning in a Pine Forest by Ivan Shishkin, Bogatyrs by Viktor Vasnetsov and Morning of Streltsy’s execution by Vasily Surikov. The prominent one was Russian virtuoso Ilya Repin. 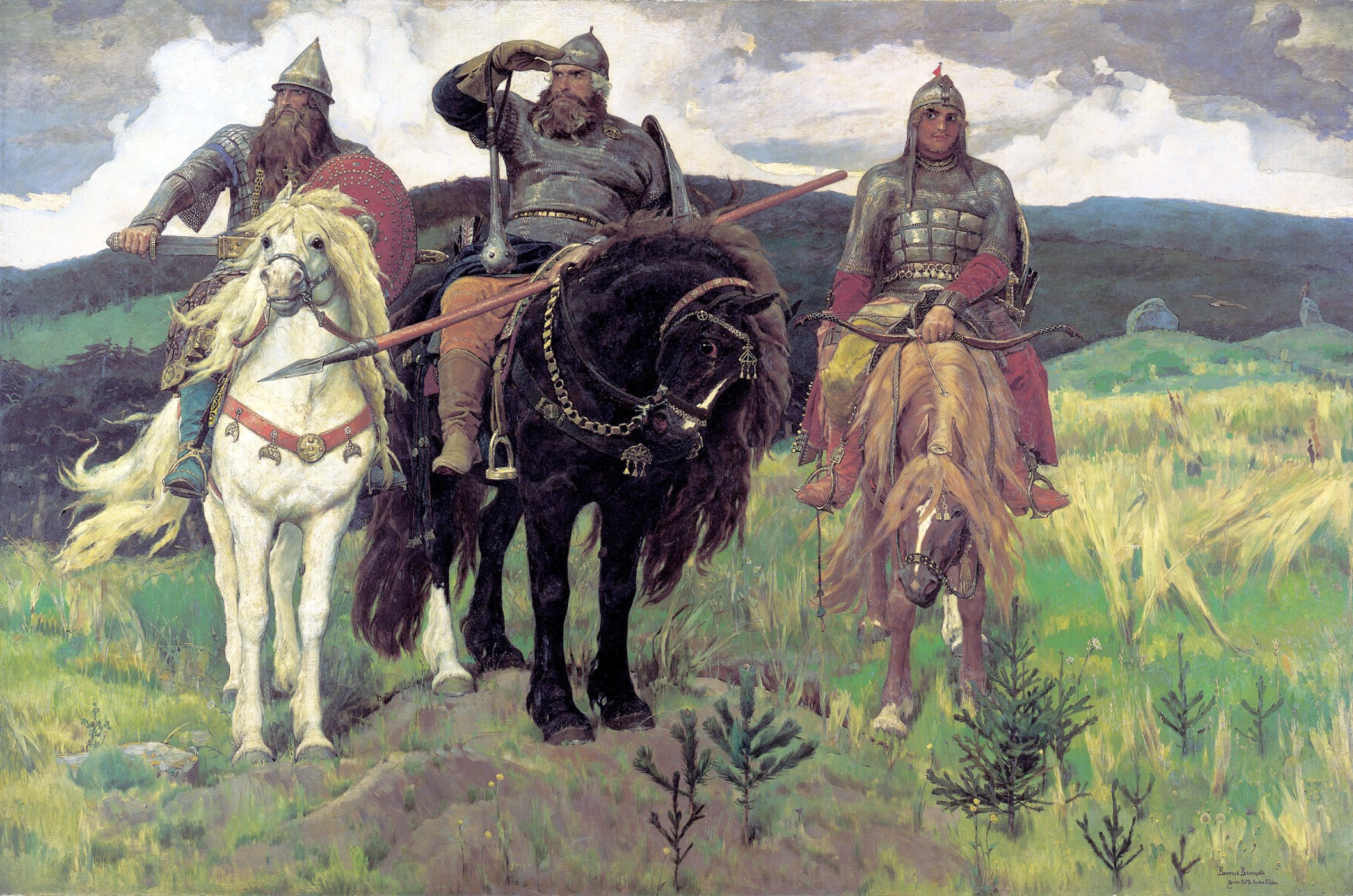 Wet on wet is a fast technique. It is mostly used in oil on canvas paintings in which second layer of colors is applied before the first layer is dried out. That is the requirement and thus painter needs to paint the work really fast in attempt to attain a certain feel in the painting which could be acquired through wet-on-wet.

Italian and French words for this technique are Alla Prima (“at once” in English) and Au Premier Coup respectively.

In old times, Rembrandt, Frans Hals, Claude Monet and Paul Cezanne were the prominent painters to practice this technique. In recent times, the most famous painter to use it was Bob Ross in during 1980s and first half of 1990s when in his popular painting show, The Joy of Painting he would finish a painting in about half hour with wet-on-wet technique.

The style is famous among En plain Air artists. The fur of the coat in the following painting, An Elderly Couple by Jan Gossaert, is partially made with the wet-on-wet technique. 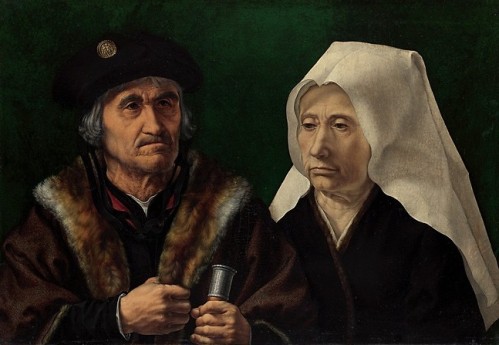 In paintings, Golden ratio AKA divine proportion AKA Phi is used in the canvases as well as in the proportions of the figures, statues and things included in the painting. It is supposed to be the ultimate scale for an artist to measure his artistic abilities.

Golden Ratio is present in every façade of science, arts, mathematics, design, music and also in nature.

The mathematical definition of Golden Ratio is “two quantities are in the golden ratio if their ratio is the same as the ratio of their sum to the larger of the two quantities.”

The golden ration is not limited in lines. It could be used in rectangles, circles, spirals and most of the geometrical shapes. That why it is very much prevalent in nature. From hurricanes to flowers, plants, trees and from big spiral galaxies to human face, ants and DNA molecules. It is available almost everywhere.

Also the artists from the renaissance period who knew the golden ratio as Divine proportion (first reference in Euclid’s Elements; detailed explanations in De Divina Proportione by Luca Pacioli in which Leonardo da Vinci made the graphics), was used extensively in paintings, sculptures, architectures and other forms of arts. It’s also very abundantly present art-pieces such as The Last Supper, Mona Lisa, Birth of Venus and Salvador Dali’s The Sacrament of the Last Supper was deliberately made keeping golden ratio in focus. In architecture like The Taj Mahal, Pyramids, The Parthenon in Athens, even in apple company’s logo, golden ratio is present. And any human body wouldn’t be possible without the golden ratio. And maybe that’s inherited in Leonardo’s famous drawing The Vitruvian Man. 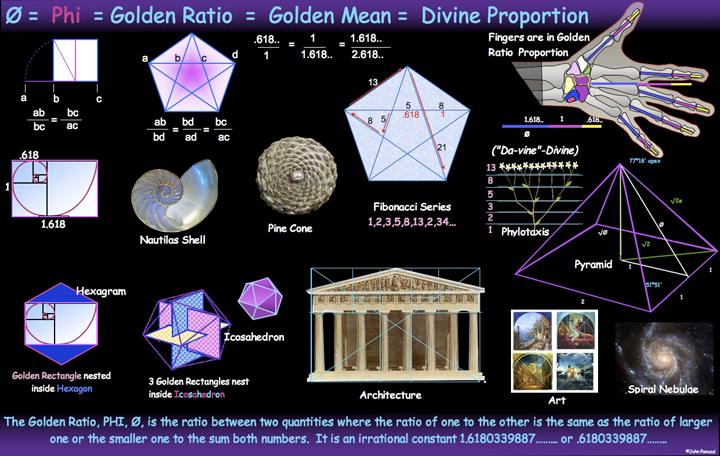 Before applying the final colors or paints, when artist uses a drawing to estimate the final version, that initial drawing is called Underdrawing. In short, the drawing done before the artist applies the color is called underdrawing.

After the final version one can’t see the underdrawings but they are perceivable through the infrared technologies. They can also reveal the alterations artist made during the process. Such alterations are called Pentimento.

Underdrawing revealed by infrared technology in Virgin of the rocks

Van Gogh sometimes used two identical square canvases in his paintings with broader viewing angle. Such as Wheat Field With Crows, Wheat Field Under Clouded Sky, Tree Roots, etc. After his fame, his followers and many other artists were encouraged to use the double square technique and also customized it with using more than two canvases for a single depiction.

The technique resembles the another art-technique of diptych paintings which included also included two surfaces but mostly with separate painting subjects instead of double-square’s side by side and seamless portrayal style. Here is a visual example Wheatfield with Crows by Vincent van Gogh:

The term hatching in painting means the creative use of lines to create shadows or different tones in any painting or a particular engraving. Due to its simplistic implication manner, it was more popular in engravings where the easier, the better rules. That’s why, in the Old Masters’ Prints from 15th century can be seen to have hatching in most of the prints of the time.

There are variations of hatching such as linear hatching, cross hatching, etc. according to how one uses the lines to create the tones.

The technique is known from the times of renaissance and many artists have depicted paintings and portraits entirely in hatching technique.

As the technique matured, the skillful hatchers made much more complex hatching drawings equivalent to a full-scale drawing or similar to a monochrome painting.

From French, it simply translates as ‘art objects’ in English. Contrary to its translation, the term doesn’t cover the regular art objects like painting, regular sculptures, prints or drawings. The term is reserved for more exotic and unique art-pieces which are mostly three dimensional, rare with heavy artistic extravagant decoration upon them.

Generally, there is no boundary for which object could an “Objet d’art”. It could be a box or a salt box or a thing which isn’t useful in practical world and is seen as an art object but is very difficult to categorize it in the conventional art-forms.

Thus, Objet d’art is a term collectively used for the art objects which couldn’t be sufficiently categorized in the conventional art-forms. 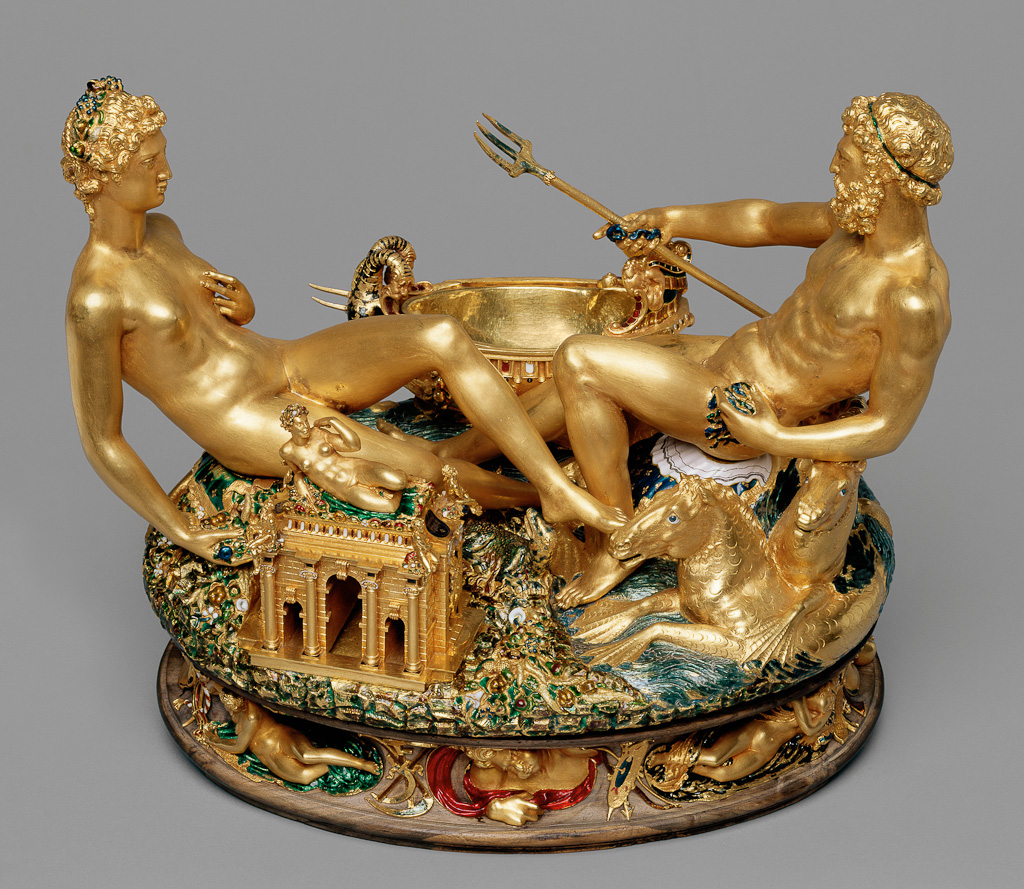 Tondo is a name for any work of art (painting or a relief) which is circular but not smaller than the diameter of 2 feet. Such works are called Tondo from the renaissance time period.

We can see such works often on the walls of churches or the holy places where such circular works were commissioned in old times. The plural is Tondi. The most known Tondo is Michelangelo’s Doni Tondo. 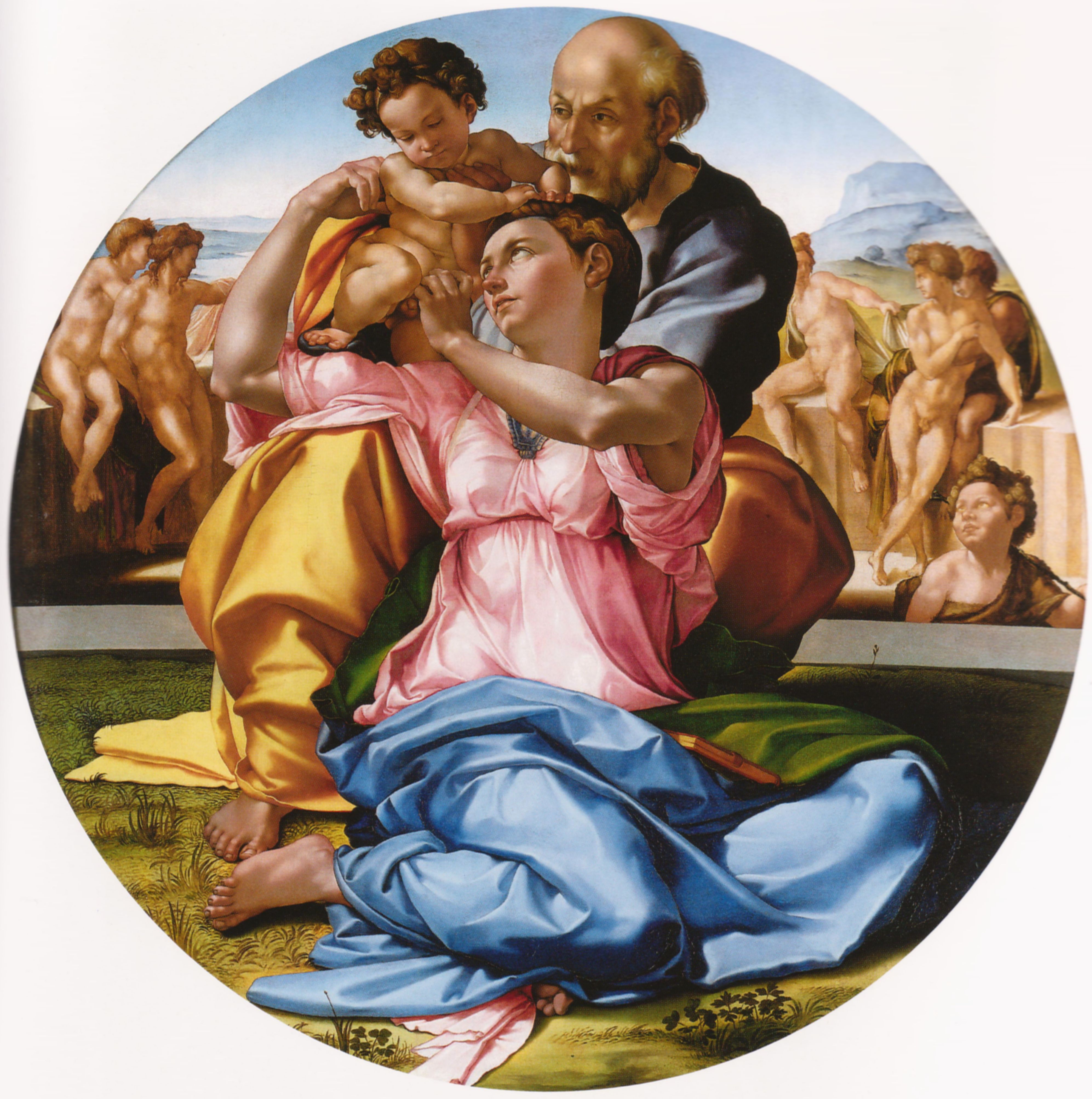 Pyramidal composition is a prominent and effective composition technique in paintings. It is supposed to have been used in Mona Lisa, Madonna of the Rocks and many other major paintings.

As the name suggests, Pyramidal composition puts the subjects or the characters/character of the painting in a way which creates an elusive pyramidal pattern in their setting. Thus, the base of the painting becomes heavy with the characters or a single character’s body part while at the top the point of attraction or the point of interest rests. Through such composition, the artist gains the power to direct the viewer’s attention to his desired location. In this case, the point of interest is the peak of such elusive pyramid.

Such kind of special composition styles provides the artist an extra benefit of playing with the subjects in meaningful ways to add value in the scene. Maybe that is why artist like Leonardo da Vinci used Pyramidal Composition regularly in his paintings. Mona Lisa is the best example. 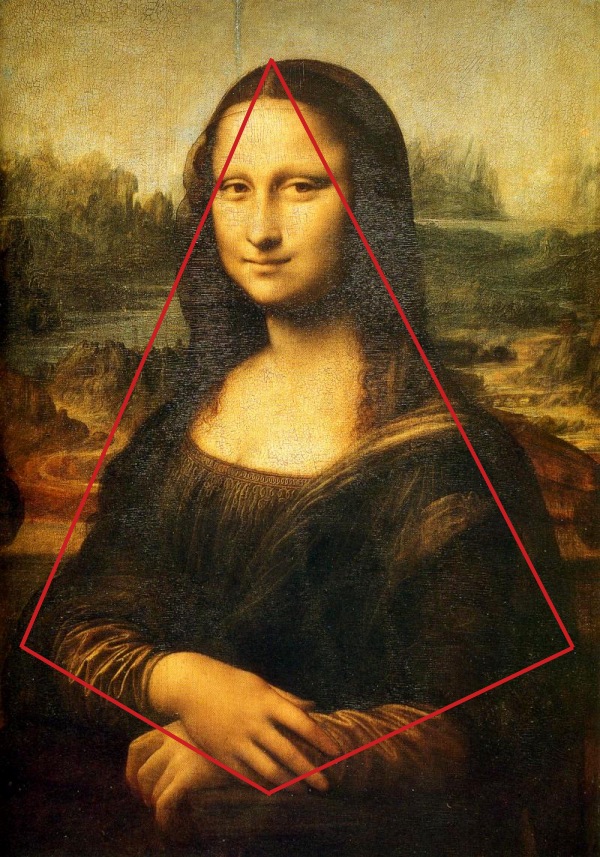