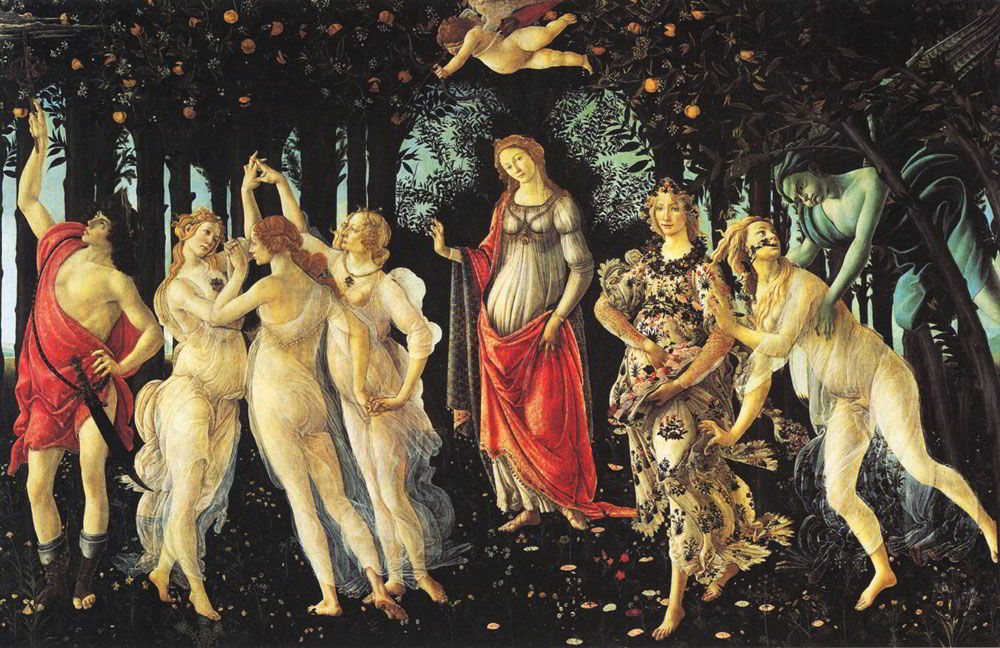 Primevera by Sandro Botticelli is one of the most popular paintings by the artist. Another famous art work by the artist is Birth of Venus. It was commissioned by the Medici family.

The painting has comprised Greek mythological gods and goddesses at one place. Their placement and convergence in the painting has made many critics and reviewers to come up with the theories and hypothesizes about what the painting really means. Thus, the painting is in the list of some of the most talked and wrote about painting with other paintings like Mona Lisa and The Last Supper.

It is an orange-grove. In classical art, orange trees are, allegedly, considered as divine or sacred. We can see the ripe oranges in the trees very clearly as they are bright in the dark background. The ground is full of different kinds of flower-plants. Every plant is, most likely, different from another. Total figure is 500 types of plants and 190 different kinds of flowers in the painting.

The background is dark with the intention to glorify the figures with light. It could be called as the mild level of chiaroscuro technique, as the colors of the figures and the background are very contrasting.


Moreover, the central figure, Venus, has a broke arc in the background, made out of two trees’ trunks and the bushes grown between them are being the supportive background for the figure of Venus to pop out.

Behind the trees is an ongoing landscape which is very little visible through the trees. Although, nothing is confirmed, the background landscape could be elongated to the sea from where Venus was born and came to the earth as seen in the Birth of Venus.

In our special, post of “Who is who: Primavera by Sandro Botticelli”, we have labeled the names of figures with giving a including a brief information on each figure.

Inclusion of the figures in the painting is one of the most bizarre and intriguing features as the iconographers are not able to decipher the meaning of the painting very confidently.

From the left, the person in red clothe with a sword hanging on the waist is the Greek God Mercury. He is god of financial gain, boundaries, luck and many other traits. He has raised his staff called Caduceus, made of two snakes, towards the clouds. He is stopping the clouds and thus, all the bad things entering in the garden.

The three graces seem to be dancing. Central figure of Venus in red and bluish clothes is gazing at the viewer while her right arm is raised in a gesture. On the top of Venus is flying the putto, in form of a Cupid- often said to be the son of Venus herself.  His eyes have a white strip on it and his arrow is targeted towards the three graces.

On the right side of Venus is Flora as her clothes represents it with the heavy printing of flowers and flowery garlands on the head and in the neck. She has a bunch of flowers gathered in her drapery and seems to be spreading it everywhere.

On the far right are two figures involved into a little action. The woman in translucent clothes is said to be Chloris (sometimes she or the figure in flowery clothes is called as Primavera), the earthly nymph and the flying man or god is said to be the western wind Zephyrus.

According to the myth, the nymph Chloris was persuaded by the western wind, Zephyrus after he saw her first time. He took her and married her. She became the goddess of Flora and according to some critics; the flowery lady on her right is her ‘Flora’ version. Though, many believe both them are each other’s companions. We can see that due to Zephyrus’s touch, flowers are coming out of her mouth. Those are similar to what Flora is wearing.

As mentioned above, the clear and confident meaning of the painting’s composition and the included figures is not converged successfully. Though, we can assume that it is the celebration of spring’s approach with its flowery scent and goodness.

Most befitting meaning of the painting is here:

Zephyrus, Chloris and Flora, the group of three on the right are representing the arrival of spring including the first winds of Zyphyrus. The three graces are dancing in joy of arrival of the spring. Venus, the goddess of carnal love, is the central figure as the symbol of potential spread of love in such auspicious environment. A cupid is depicted right above her head and both of them are companions in many paintings. Cupids induce the love in any living form.

In the painting, the blindfolded cupid is about to attack with his little love-arrow on to the graces, who are already in the joyous mood. On the far left, Mercury is protecting the whole prosperous and desireable scene from the upcoming brown clouds which could put the whole scene into danger. His Caduceus and sword is with him which shows the determination of protecting spring.

As mentioned above the orange trees are considered to be sacred while the floor full of different flowers, again, is the result of arrival of spring.

That is the straight, simple and apparent meaning of the scene.

Similarities with Birth of Venus

There are small similarities between the Primavera and Birth of Venus, which encourages us to think, in both paintings artist has put some indications which clarifies to that he deliberately wanted us to believe that both pictures are the two different version of the same location he imagined, instead of just being two different version of the same myth.

Those indicators are the sea and the orange grove. In Birth of Venus, there is also an orange grove on the far right and near that is the sea shore. In current painting, we are looking from that grove and behind those trees could be the open sea. If you look closely between the black trunks, it isn’t easily recognizable if it is just a landscape meeting to the horizon. Instead the bluish shade after the green grass is more acceptable as the same sea which is depicted in the Birth of Venus.

Although, the accurate meaning of this much-talked about painting remains obscure, we can confidently assert that it is a portrayal of auspicious things like love and spring which a person always wants to stay in his life forever.