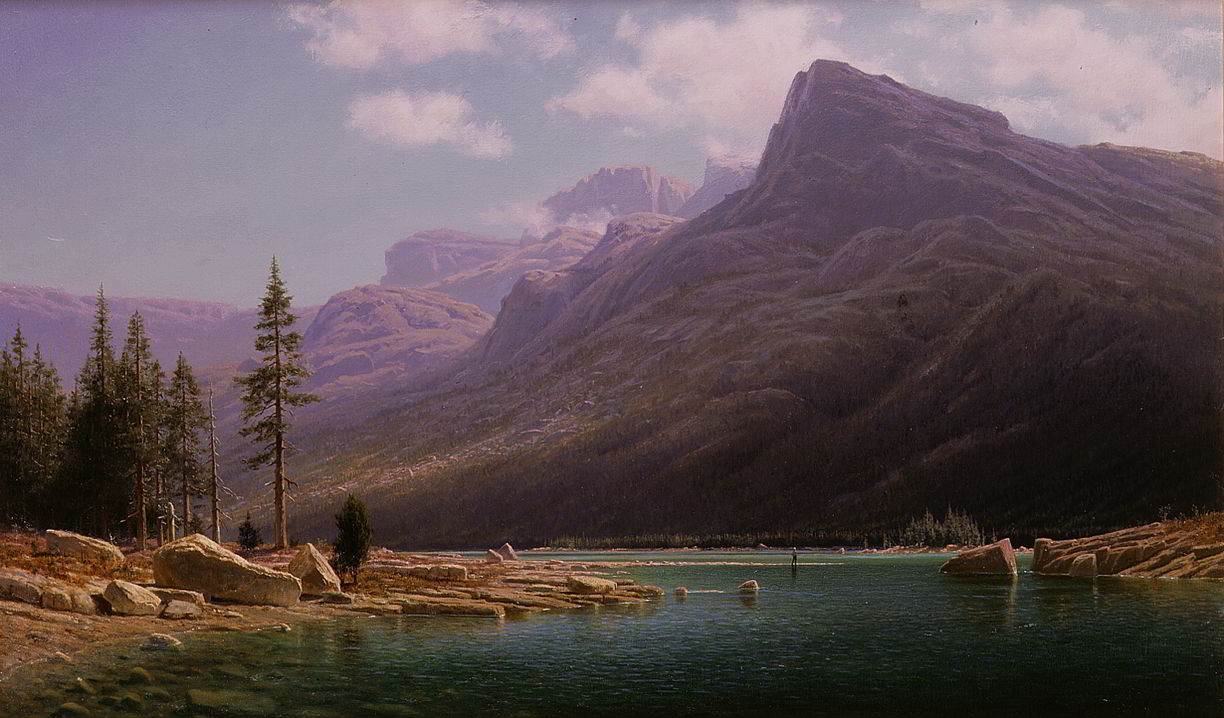 The landscape’s grandeur of “In The Higher Elevations” stuns us when we find out the little man standing middle of the river and also his relative height to the tall trees on the side and the mountain itself.

Joseph McGurl has brought out the grandeur of the nature in the current painting with emphasizing on the beauty of the scene.

As much as serenity the scene reflects, there also happens to be almost hearing the silent sound of nature in the air over the river. A sound of originality and authenticity. The raw form of nature where standing one alone man feels to be very tiny in front of everything.

Joseph McGurl is a realist artist and the presented piece is, without a question, a piece of very fine realism. The colors, compositions and objects in the painting are true to the real scenario.

Another minor style used in the painting is Luminism. Luminism is about the light effects in the context of landscape paintings. Without taking to risk of making a mythical environment, luminsim stretches the use of light to explore and emphasize the surroundings in object more near to tranquility and calmness. Current, painting have violetish tint at the top of the mountain which could be true in the real scene or just element used from the style of Luminsim to beauty-fy the scene.

Thus, the painting is a blend of realism and luminism.

The jargons of art-world divide and define every little detail for easy and proper understanding. Such term is called En Plain Air. It means, “in the open air” and is often depicted in open place, sitting right in front of the landscape which is being depicted taking all the painting tools along. The painter of this art piece is a Plein air artist.

Another term is Staffage. It is used when a painting (mostly a landscape painting) includes tiny human figures which aren’t the main focal subject of the painting. They are just added to add some human-touch. Overall theme or the subject stays the beautiful landscape.

At the end, we can feel the tranquility the painter is trying to deliver with the impressive landscape and his use of different style and techniques. It is 28 x 46 inch oil on canvas painting safe in private collection.

One Response to “In the Higher Elevations by Joseph McGurl”