Third installment of the Jargons of the Art-world brings you 10 more technical terms used in the artistic communities.

Tronies were the output of the Dutch Golden Age. Before the Golden Age (17th century) in Netherlands, people were afraid of representing themselves in the portraits. The social pressure made them stand for the portraits in very steady, rigid and emotionless ways.

When this barrier was broken in Dutch Golden Age, the fear and restriction were gone and artists began to captures the most hidden emotions of people on their canvases. The subject-person’s importance in the society didn’t matter much. The reason is that they were determined to capture the unique and natural expressions.

And this new genre of portraits focusing on the human expressions (contrary to a portrait’s rigid emotions) was called as “Tronie.”


The origin of the word itself is from the word Troigne used to describe head, face and expression of face.

Rembrandt and Johannes Vermeer were the Dutch artists who were known for depicting their own tronies. The most famous tronie is named “Girl with a Pearl Earring” by Johannes Vermeer or the Dutch Mona Lisa as it is called sometimes.

Here are some other examples of a Tronie: 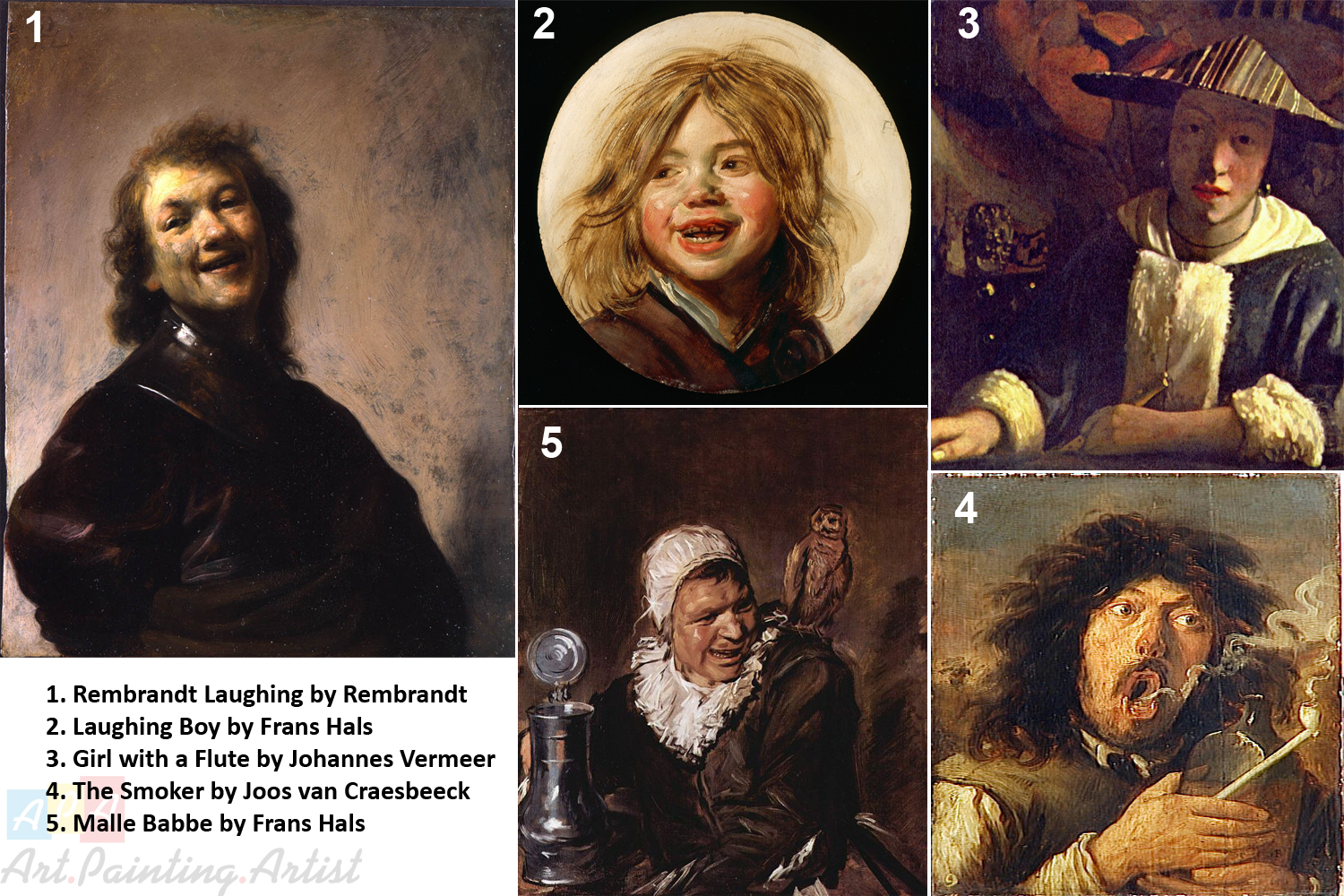 Problem pictures are the depicted moment of a scene which can be derived in more than one meaning. Understanding such painting could be tricky as you can’t conclude on any final decision because of the artist’s cunning choice of depicting such a moment from which a viewer can derive many understandings.

Here is the most famous example of a problem picture: And When Did You Last See Your Father? by William Frederick Yeames. 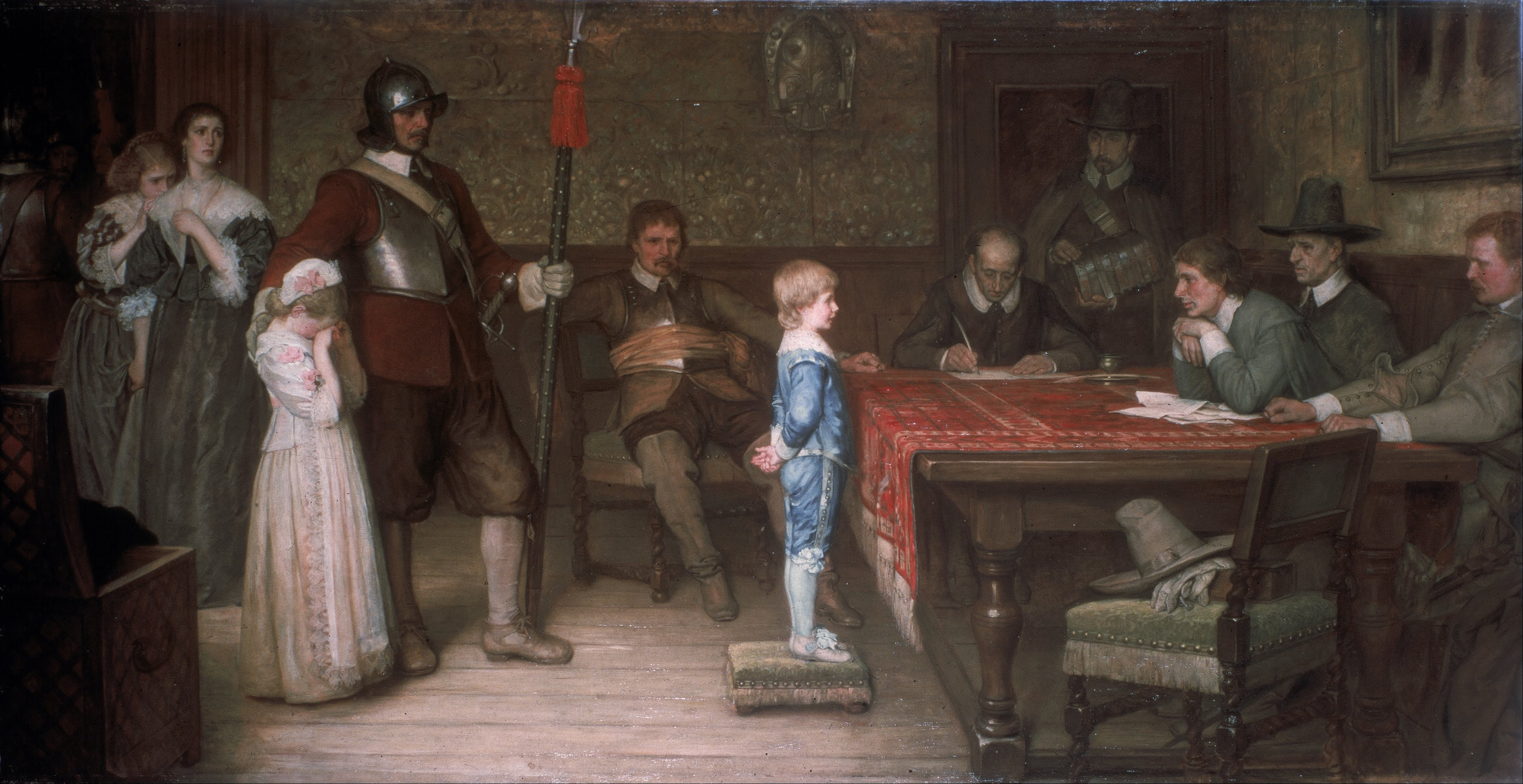 Parliamentarians are asking the boy of a royalist a tricky question which could reveal the boy’s father’s location. What makes the painting a problem picture is the boy’s probable answer. The artist has left it for the viewers to imagine the little boy’s answer.

The boy could most probably reveal his father’s location leading the sequences into real bad situation for his family. Or gauging the question’s importance to his father’s safety he could lie about it. Going even further, the boy could stay quiet or would start to cry just like his sister at the left side of the painting and deny answering anything.

Painter has chosen the moment very carefully and painted the characters in significant ways to discard any indicative points about the boy’s probable answer.

Thus, a problem picture represents a scene which has ambiguous meanings and could have multiple endings or meanings without providing confirmation on anyone of them.

Another known problem picture is The Camden Town Murder by Walter Sickert.

There are also Problem Plays available which leaves the audience thinking about the multiple outcomes of the play.

Of any art piece from any art-form can have many iterations or versions as the artists may have needed to produce multiple version for different locations, to rectify the mistakes in the first art-work or just to create a different themed version of the same art for variety. For example, Swiss artist Arnold Bocklin made five versions of his renowned painting, “Isle of the Dead”.

Another example is The Scream by Edvard Munch which has total of 5 versions including a lithograph.

Prime word comes from the Latin word Primus which meaning “first rank” or only “first”. Thus, it simply means the first version of any art work series.

Here is the prime-version of the aforementioned painting “Isle of the Dead” made in 1880 with oil on canvas.

Painters between the times of 17th century to all the way to 13th century are eligible to be called as the Old Masters. Other qualifications they need are that they should be exceptionally skilled in their particular art and should be more like a Master of their local guild of artists. These qualities would make a painter from 13th to 17th century artist an Old Master.

Here is a painting from one of the old masters Sandro Botticelli’s “The Birth of Venus”, painted in 1486:

During the renaissance period, the big-name artists like Leonardo, Caravaggio, Titian, Michelangelo and artists like their caliber were hugely followed by the other small artists or the enthusiastic learners of the art. They would wait for every new art-piece produced by those respected painters and on the release day, they would run after the art to analyze, learn and imitate it in their own terms. Those were the kinds of, who would learn by watching an ample art instead of having the privilege of a big studio or the capacity for the admission in those big-name artists’ studios. Every new art-piece was a knowledge-treasure for them and they followed the respected artist and their art reverentially.

Some of the artists’ followers got special names or titles. For instance, Caravaggio’s followers were called “Caravaggisti”.  Just like that, the followers (including the students of his studio) of the universally reputed artist Loenardo da Vinci were called Leonardeschi.

This was a much respected unofficial title any artist could have gotten in the contemporary times. Here is an example of a Leonardeschi painting: 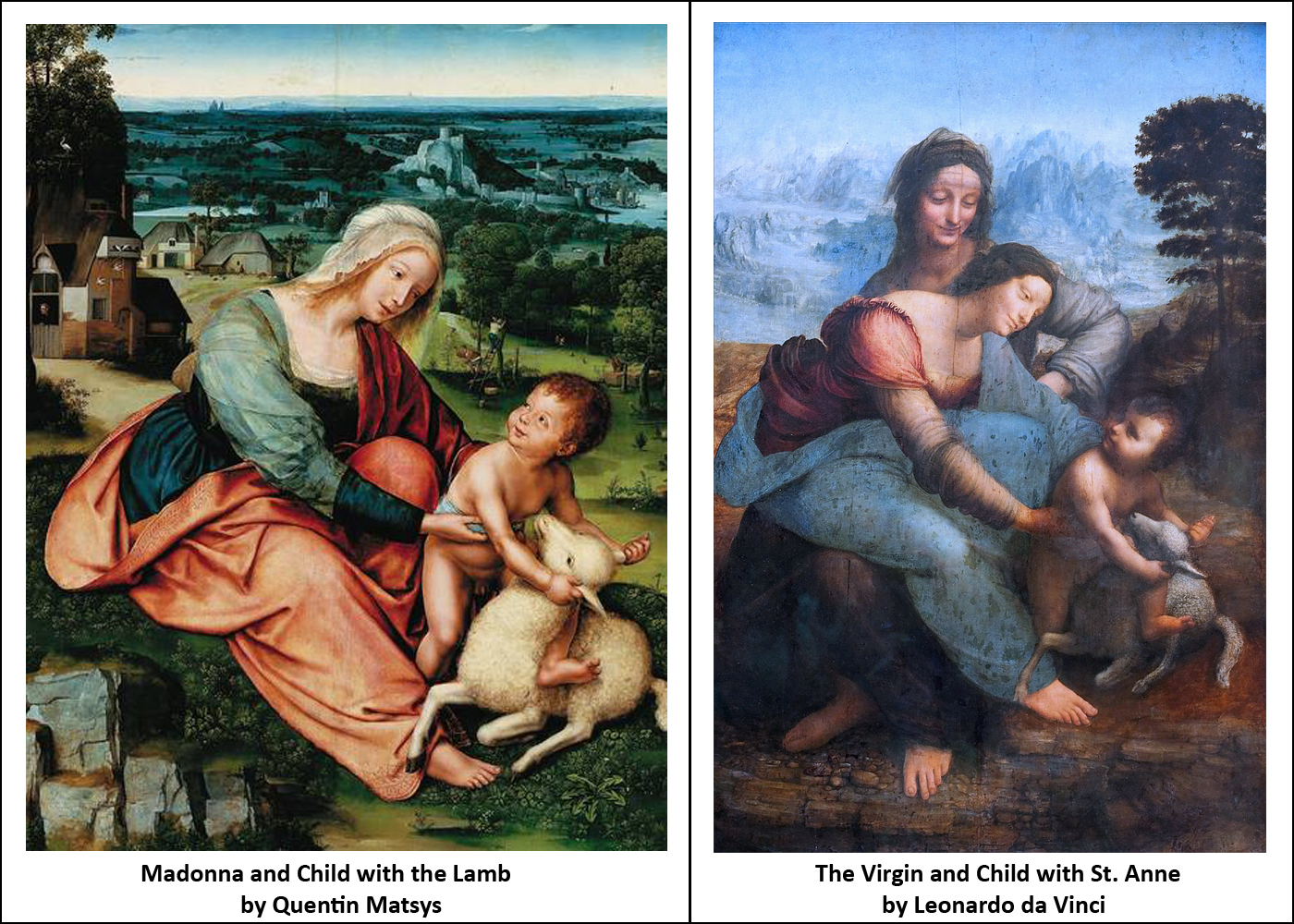 Astonishing similarities are most apparent. Quentin’s painting is almost a copy version of the Leonardo’s with very few differences of background and absence of St. Anne. From the sitting position to the virgin’s leaning style everything is “inspired” from the Leonardo’s painting.

Term Moti Mentali is of an Italian origin and literally means “Mental Motions”. In more general words, it is also known as “movements of the mind”.

The term is mostly associated with Leonardo da Vinci’s extraordinary works as he was one of the first artists to come with the idea of capturing the mental emotions of the subject on his face accurately.

In paintings, Moti Mentali simply means the artist’s ability to capture the subjects’ thoughts or the current disposition on the face in the painting. It is a strikingly very difficult ability which explicitly speaks out the subject’s general disposition.

His best painting at capturing the subject’s “mental motions” on the canvas is the “Lady with an Ermine”: 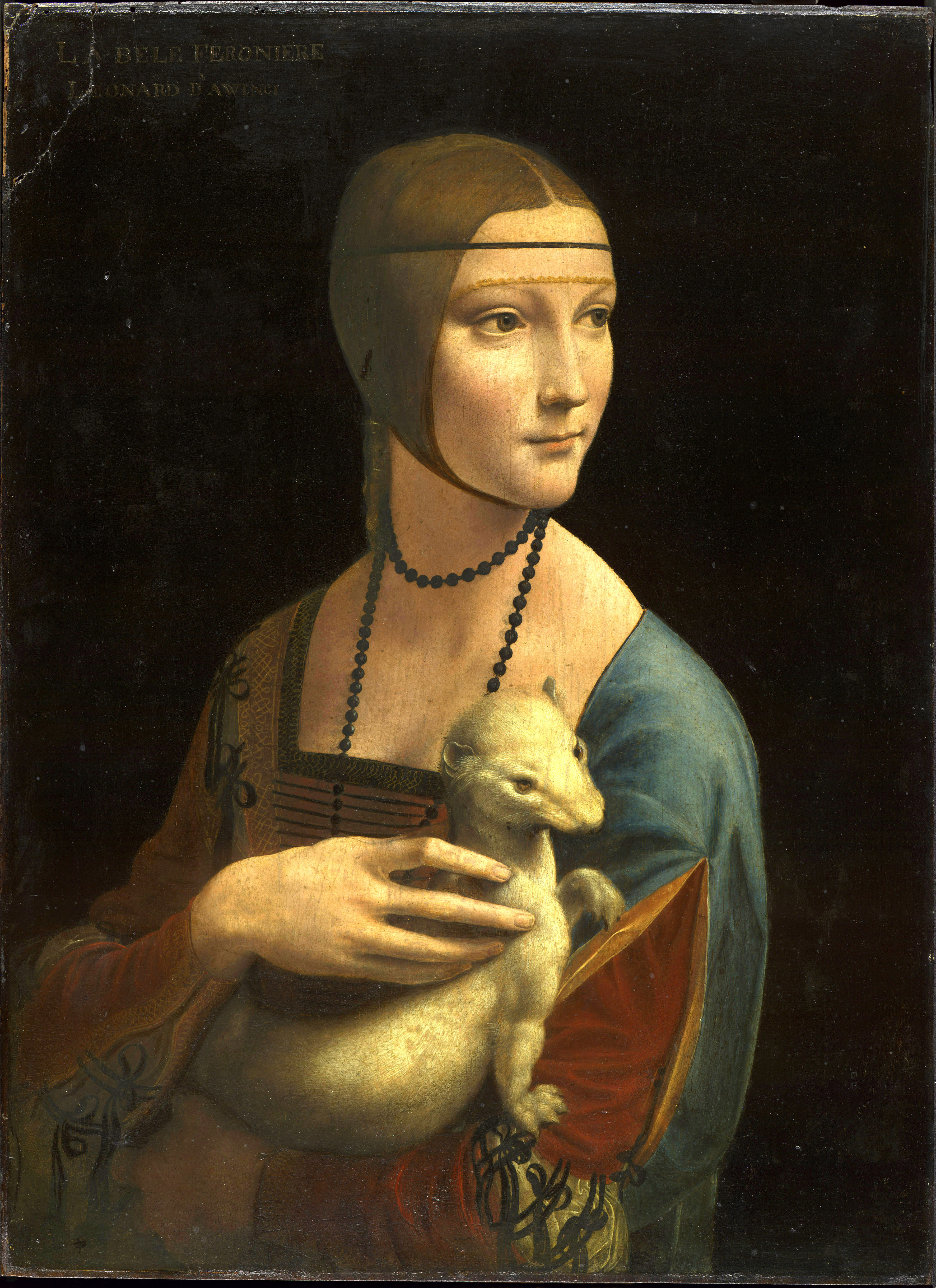 Lady with an Ermine by Leonardo da Vinci

It is revered as a breakthrough for being a psychological portraiture. The face of the lady in the portrait has very minimalistic expressions, but still we get a sense of the lady’s firm and determined mentality in her general life. Painting with moti mentali is more like a painting with depiction of the emotional aspect of the subject.

A photograph captures a person’s profile as well as his emotional state. Capturing it in a portrait with brush strokes is challenge in which Leonardo’s mastered his skills.

Danse Macabre the French word literally means Dance of Death. In the old times of medieval and renaissance, artists made so many art-works regarding to the subject that it has become an artistic genre now.

It is the pure depiction of death or even personified death.  Here is an example: 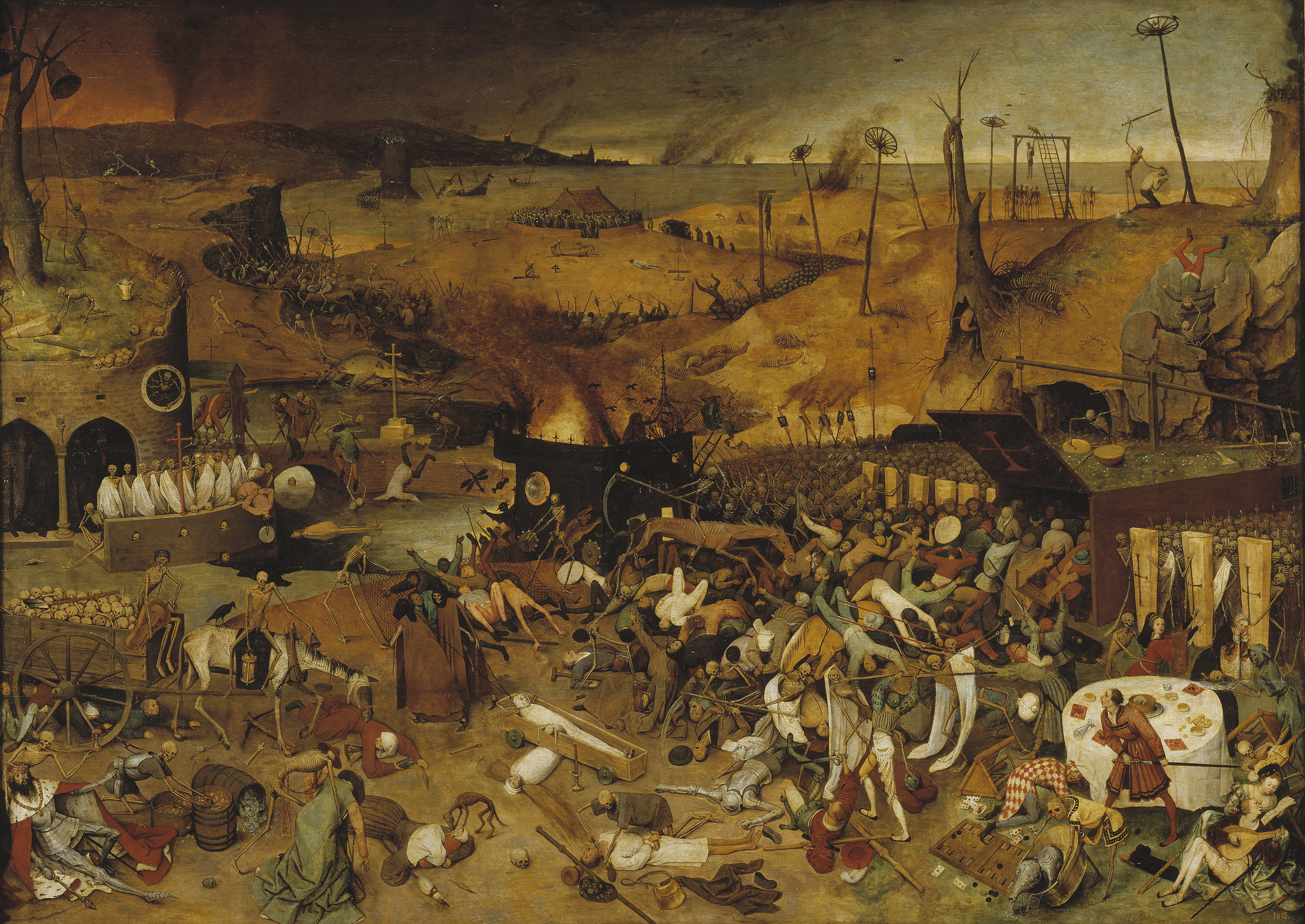 The Triumph of Death by Pieter Bruegel the Elder is the perfect depiction of the Danse Macabre genre. It represents the death (in form of the skeletons) winning over man, equaling everyone from rich to poor in same way. It shows that at the end, everything which a man runs after doesn’t matter at all.

The genre majority caught on in the artists’ community in medieval times due to the Black Death (around 1348) incident which killed millions of people only in European countries.

Claude Glass or Black Mirror was heavily used by the 18th and 19th century painters before they commence depicting any landscape.

Sometimes, the natural scenery has many tonal up downs and differences and this could make artist a bit confused to perfectly paint it on canvas over the time span of days until the painting is finished. To get a persistent image of the view, painters used glasses tinted with dark colors. The reflection captured in those tinted glass would nullify the tonal incoherence of the painting, and represent it as a smooth view on behalf which artist would easily be able to depict his desired outcome.

This technique of using a tinted glass was started by the French painter Claude Lorrain of 17th century. The name of the tinted glass is kept after the painter’s first name. The name Black Mirror was took off by the glass’s property of being dark colored, mostly black.

Here is a picture of a modern Black Mirror:

A painting containing a group people having drink or good time while chatting, listening or making music or involved in any other group activities is called Merry Company painting. Such paintings were popular in Dutch Golden Age and Flemish Baroque era.

The presented painting A Musical Evening by Guglielmo Zoochi is a perfect example for a Merry Company painting. It is a depiction of four women and two men gathered for a musical evening in which a woman is playing the instrument while the others are enjoying the music. They are having some good time. Merry Company could also be used for a painting like The Orchestra, Biergarten by Wilhelm Carl August Zimmer in which an orchestra has been gathered in a garden and the listeners are enjoying the music while drinking beer.

The term comes from Peter Paul Rubens’ depictions of the big women in most beautiful way. Rubens used to paint chubby women in any of his painting. This affection toward the plump women caused a word Rubensian or Rubenesque even for the other artist’s paintings which contained chubby women. 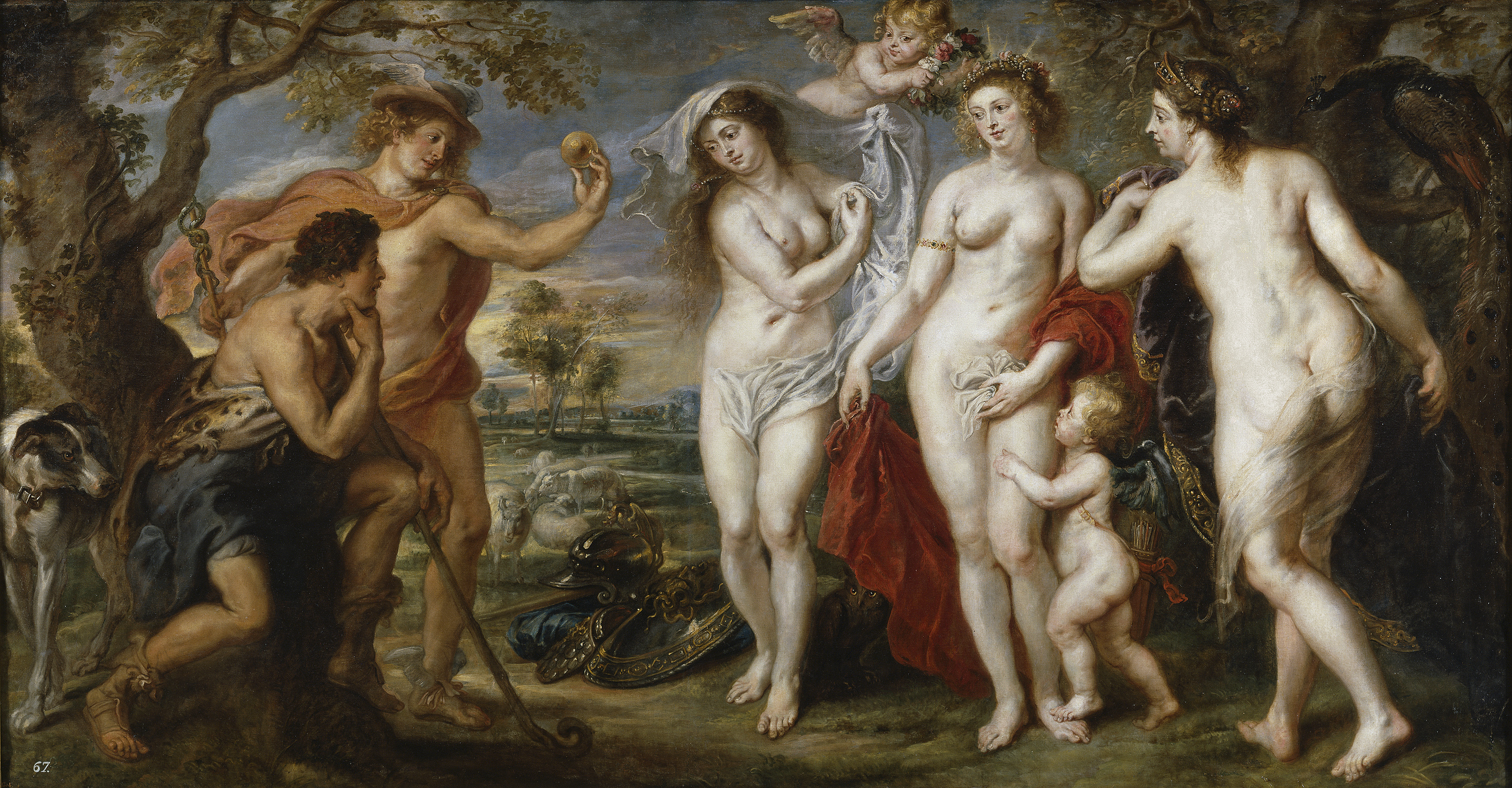 The painting is called The Judgment of Paris (Madrid Version) by Peter Paul Rubens. The scene depicts the event from Greek mythology in which the three goddesses – Hera, Athena and Aphrodite – reaches Paris, the son of Priam, the king of Troy to tell who is the most beautiful in three of them. Paris’s answer and some other consequences caused the Trojan War.

Many other artists have depicted the event but Rubens’ depiction of the goddesses with chubby-ness is unique in them all.

Here ends the third installment of the Jargons of the art-world series. You can read the first and second part on our website.