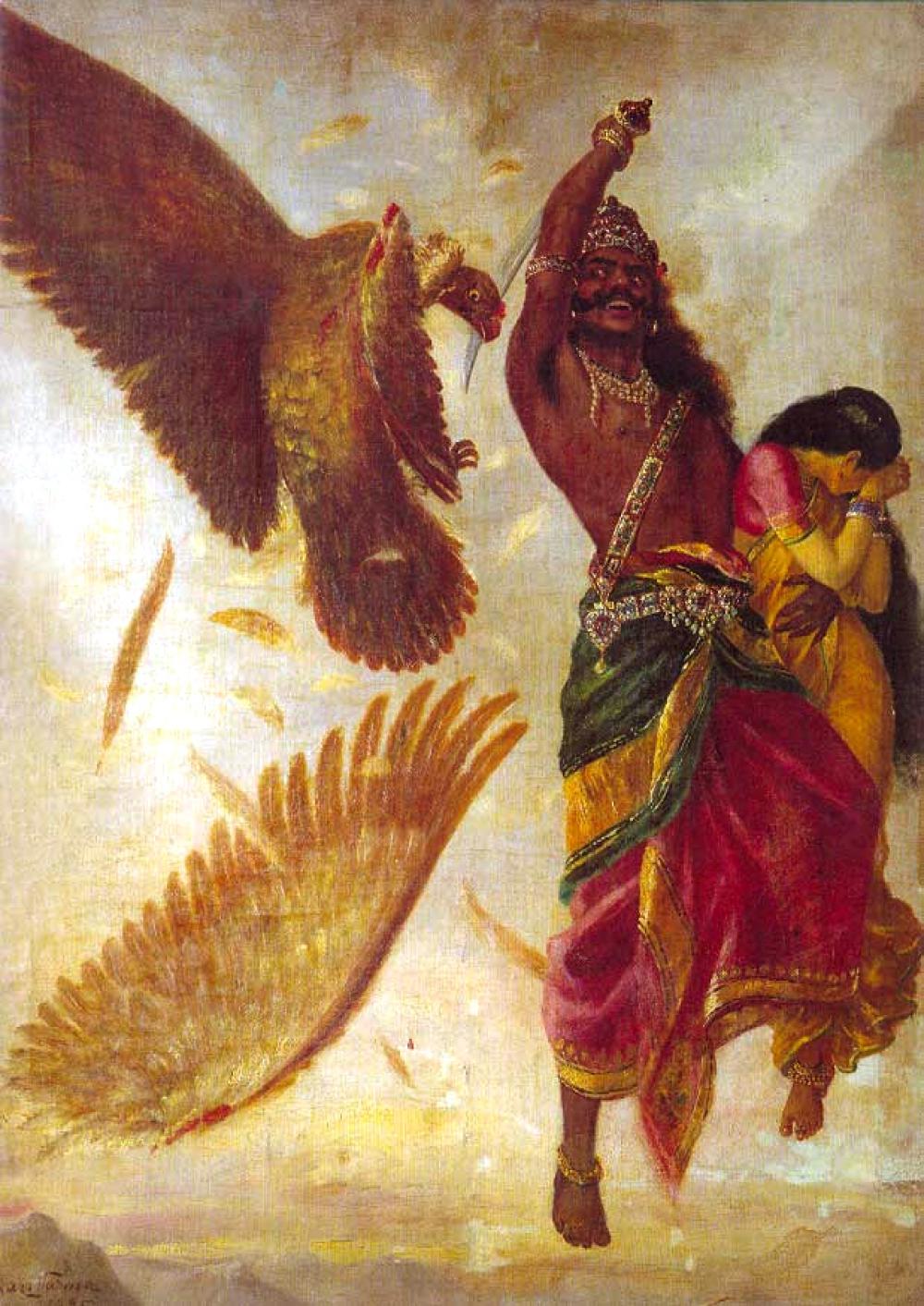 Indian artists aren’t as much known as the western artist. Though, if we think about India one name comes in our mind, Raja Ravi Varma. One of the few 19th century Indian painter who had the caliber to stand alongside the top level western artists.

Here is presented one of the best art works by Raja Ravi Varma. He was known, mostly, for depicting the scenes from either Ramayana or Mahabharata, two grand Indian epic poems, which are often equaled with Iliad and Odyssey by Homer. But, in reality, such comparisons are baseless. Subject of the current painting is taken from the Indian epic poem Ramayana.


Story of Jatayu Vadha (The Killing of Jatayu)

Ramayana is a story in which the evil king kidnaps the virtuous Prince Rama’s wife Sita, when they were spending their time of exile from their own country to keep the promise of his father – and not as a punishment.

Although, Jatayu was a vulture, he was a demigod and could speak the human language. He was an old friend of Rama’s father. He bears his own legend of competing with his brother for flying nearest to the sun.

When the Rakshasa (demons) king Ravana kidnapped Rama’s wife and was on the way to Lanka –his capital- on a vimana (a plane with magical powers), Jatayu was an old vulture who has been weakened. Still, he tried to rescue Sita from Ravana. Though, Ravana being a strong knight killed cut off Jatayu’s wings. Thus, the old Jatayu fell on the ground. Though, he lived to tell Rama about Sita’s kidnapping.

During the conflict between Jatayu and Ravana, Ravana was flyting in his magical Pushpak Vimana . The demi-god vulture Jatayu attacked on him with his strong claws. Ravana was saving himself by flying his vimana as fast as he could and also attacking on Jatayu with his sword called Chandrahasa.

At the end of the fight, Ravana got the chance to cut off Jatayu’s one wing and the fight ended.

The painting by the Indian artist represents the exact moment when Ravan cut off the wing. After that Jatayu was unable  to fly anymore and fell on the ground. Although, the painting doesn’t include the Pushpak Vimana which is present in the folklore, the essence of the scene represents them all flying. Sita is grabbed by Ravana in one hand while fighting with another hand. As much shame Sita is feeling to be in hands of other man than his husband, she is also unable to see the old Jatayu’s wings cut off and death. Thus, she has hid her face arms in agony.

Ravana’s stance and face represents his victory. The realization of winning the battle has made him happy and smiling viciously. Although, a bird’s face can’t provide enough expressions, but we can assume that Jatayu is also in shock with her one wing cut off.

The clothes and garments of both Ravana and Sita are contemporary to the epic’s time when along with women wealthy people and kings also wore enough ornaments.

Raja Ravi Varma painted the picture in 1895 at the age of around 45 years. Thus, the gathered knowledge and experience of painting art is clearly visible in the current painting. This oil on canvas painting is currently residing in Sri Chitra Art Gallery, Thiruvananthapuram, Kerala, India. There is also another version by the artist of the same incident.