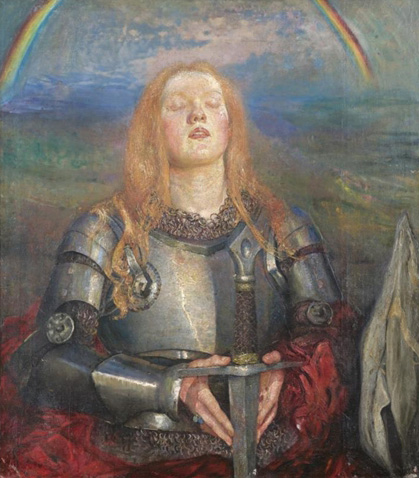 Annie Swynnerton is a well-remembered name among art lovers irrespective of their backgrounds. Whether you are rich, poor, industrious, lazy, Socialist or a right wing, appreciating the suffragette’s works is unavoidable because they make the presence of
character and individual strength quite evident despite your possible willingness to accept that Swynnerton may have renounced God. While Joan of Arc believed in God to an extent Swynnerton may have found ridiculous or even laughable, the fact remains that Swynnerton’s works has seen the addition of a new character in the old line up of inspiring women. Remember that in other works, where she has painted male portraits, the subjects are either too old or too young to fit the description of the classical hero that pervaded the Renaissance art movements.

Annie Swynnerton seems to be more leniently disposed in glorifying women. Through the impressionable years, Swynnerton grew up in an England that was fuming with new ideas and debate. While the sparks flew from conflicts between liberals and conservatives at the highest institutions, Swynnerton seems to have found her way in the direction she had always wanted. Besides, you can easily find this Joan of Arc painting to be a childlike admiration of her protagonist from the former era of politics.

Swynnerton may have been fascinated with Joan’s stories much like the folks in England were, since she raged her religious battle for the French against tyrannical British invasion and oppression. It seems that the French had a weak military, and were only able to hold the British down or on their back foot when little Joan inspired the French to fight like men of God. She had seen her village ravaged,
kinfolk raped and all that before she knew about sex. Swynnerton obviously had her sympathies for Joan, but created an image of the
first female rebel of the century in a way that would suggest dogged and artless devotion in the painter. It is interesting to note that
after the hero was burned on allegations of being a sorceress, she was canonized, or given sainthood in 1934 – mainly for her miraculous achievement in pushing the English back for years, only as a teenage commander who took the voice of God seriously. This, she achieved after a string of fierce meetings with the French King, who never took her seriously. Swynnerton missed the canonization by a year, dying in 1933.


This is a 3 feet by 2.5 feet oil on canvas, which can be used in any enclosure, as long as you have a large enough wall to house the
invisible halo around this work.