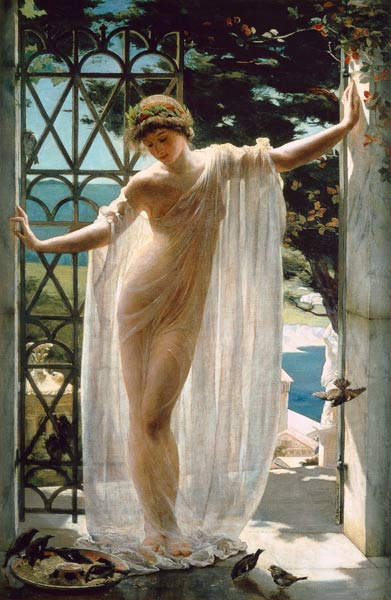 Lesbia is a word making us musing about the contemporary similar sounding word of Lesbian. Although, in the Greek history both words are related at a point, the word Lesbia comprises much more history in it than the shallow modern meaning of the word connected with it.

There are two ways in history which leads us to the origin of the word Lesbia and also the woman called Lesbia depicted here. And both ways are connected to each other to some extent.

First is the Greek poet Sappho (630 BCE – 570 BCE). She was born on the island of Lasbos, and some historians claims that the modern word Lesbian derives from there as Sappho wrote some poems relating to women’s love of that island. She was effectuated by the beauty of the women of the island and wrote about them in her poems.


Another point in history for word Lesbia is Latin poet Catullus who used Lesbia as the pseudonym for the fictional woman whom he loved and on which his most of the love-poets were based. Historian claims that Lesbia was only a name to hide his real lover, Clodia, the wife of a Roman patrician. She was said to have an unhappy marriage and unfaithful relations with her husband. And among her numerous affairs with royals people as well as with slaves while being married, she also had affair with Catullus. Thus, while hiding his lover’s identity, Catullus wrote about Clodia under the name of Lesbia. This is a theory historians have come up with according to the clues and writing found in old texts, poems or other ancient references.

Saphho was born many centuries before Catullus and it is considered that one of Catullus’s poems is a direct translation of one of Sappho’s poem, which she wrote about the womanly love of the her hometown Lasbos.

Thus, the name Lesbia or such woman doesn’t show up anywhere on any page of the history. The name resides in Catullus’s poems or has some connections with Sappho’s dearly poems for her hometown and the women of the island. Thus, Lesbia herself is an imaginary woman conjured up by the two poets to express their affections or love for the real persons in their lives.

The represented painting, titled Lesbia by John Reinhard Weguelin is surely depicting that same imaginary woman about whose Catullus mentioned in his poem. Her depiction is often times represented with a house sparrow by many artists. Catullus 2, one of the love-poems regarding to the fictional Lesbia by Catullus describes the relation of Lesbia with her beloved pet Sparrow. While Catullus 3 tells about Lesbia’s broken heart when the beloved sparrow dies.

Weguelin has included the second poem’s sparrows with the beauty of Lesbia for which the poet fell for.

Thus, this attractive and flawless depiction of the imaginary woman perfectly signifies the perfect imaginary woman, the poets dreamt in their poems – an impeccable beauty.