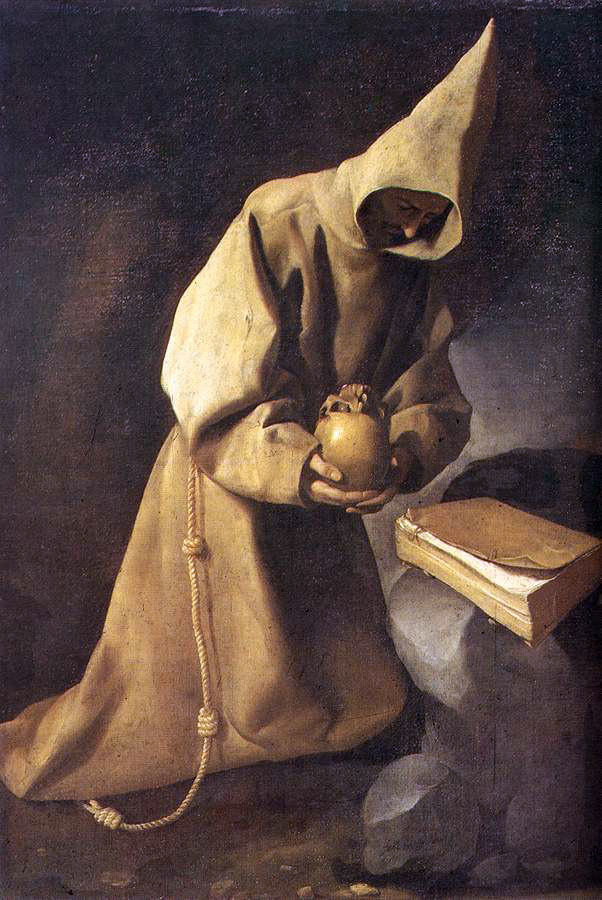 The famous Spanish painter Franscisco de Zurbaran has drawn some greatest pictures in the history. In his oeuvre, the meditating saint Francis is a major subject. He has drawn various portrait of this saintly personality.

A quick glance at the current representation of Saint Francis raises a question in my mind. Why a skull is included in there? And as I thought about the question further, I had some speculations.

St Francis kneeling on ground with a skull in his hand, illustrates the deep and cryptic meanings of life and death. Maybe hinting the fact that death and life is contemporary to each other. Artist tried to portray the fact by making St. Francis the representative of life and the skull, of death.


Those both parts are the essential parts of a human life-span. The most indulged philosophy you can get out of the art-piece is the intensive thinking about the meaning of life.

In addition, St. Francis himself is in some kind of cave or a grotto. And the book in front of him is maybe a book of a sacred writings. We could say that the initial thoughts about life and death were aroused from the book.

As an artist, Zurbaran has accomplished the fine skill of drawing. The finely detailed cord around his waist and the clothing of the era is drawn with very much realistic view in this oil-on-canvas painting. As if Zurbaran had St Francis stood in front him for hours.

The thought-provoking paintings of the artist put us in a state of wonderment that how far we are from thinking about the primitive subjects of life and death.