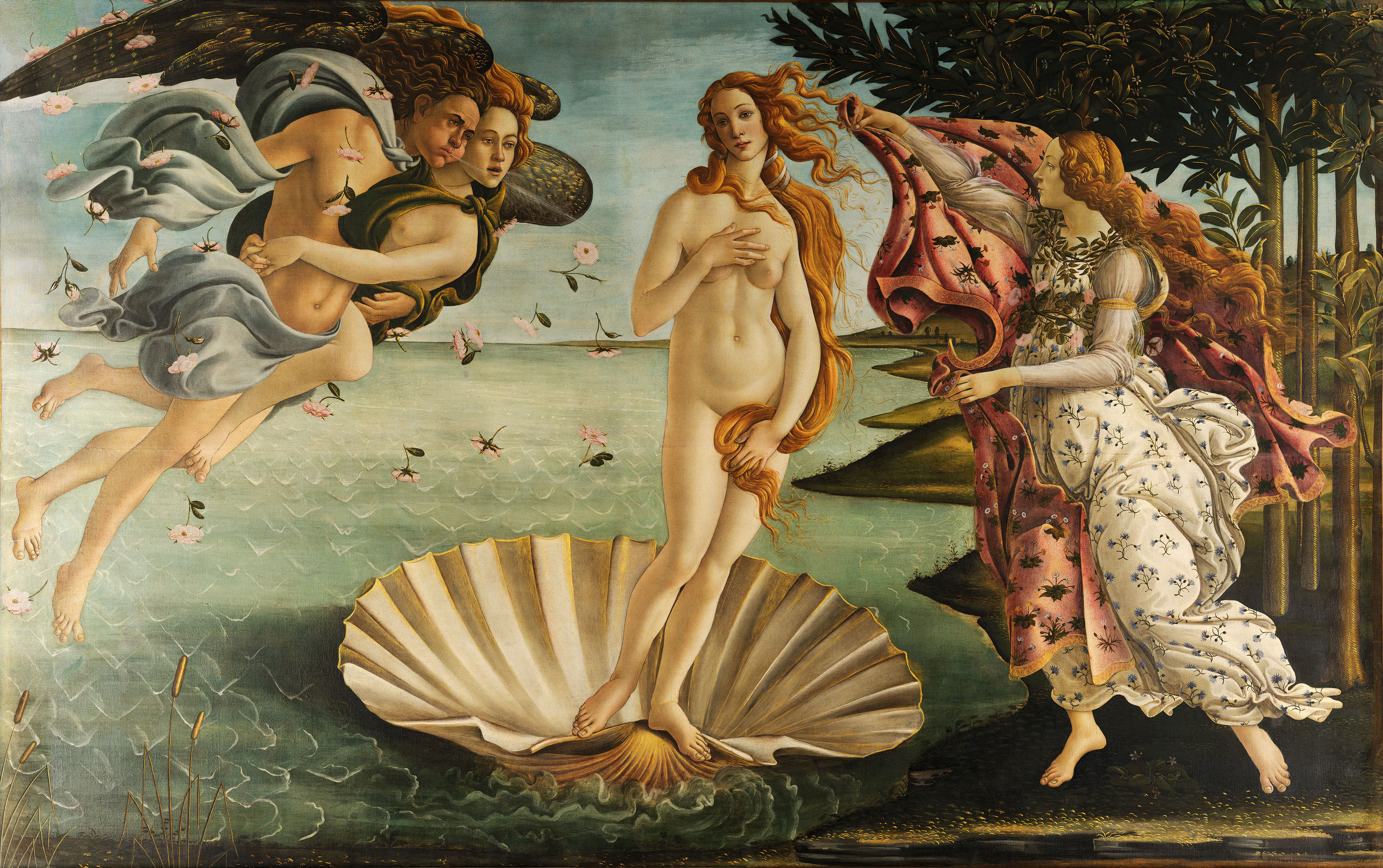 The Birth of Venus is equally famous work of Sandro Botticelli with Primavera. It simply depicts the moment of the birth of the love-goddess Venus in renaissance era style. It holds a much lesser approach of the renaissance era’s masculine and somewhat three-dimensional depictions. The painting seems more linear and flat in comparison to the other famous works from the same era.

Myth of Birth of Venus roots in Castration of Uranus

The birth of Venus has a brief history and roots in the story of Uranus’s castration by his own son, Cronus.

Uranus (the sky) was a Greek sky deity. He also happened to be the son and also the husband of Gaia, the mother earth. Together they had numerous kids including Twelve Titans, three Cyclopes and many Hekatonchires. Uranus hated the last ones and tried to push them back inside the mother earth’s womb. Enraged by the act, mother earth Gaia and her youngest Hekatonchire son Cronus decided to take revenge.


On the same night, when Uranus came at night to Gaia, Cronus attacked on Uranus with a big stone sickle and castrated his genitals.

The big brawl went on, but regarding to our painting, the castrated genitals fell into the sea and as a result, born the goddess of love and sex, Venus.

Figures in the painting

There are total of four figures in the painting. The central one standing on a sea-shell is goddess Venus herself. On the left side, the two figures are the god and goddess of wind. Therefore, they are depicted floating in the air and also blowing with their mouth towards Venus suggesting the fact that they have drove Venus to the sea shore.

Figure on the right side with a mantle in hands is a nymph ready to receive Venus with the cloth to cover her naked body.

Botticelli in a way depicts the painting with a celebrating mood. He has given the goddess the central stance. Three other figures are aiding her and as the nymph is welcoming her on the earth, she also feels to be welcoming her in the world.

Other things which comes into mind is that by showing Venus being received by an ‘earthly’ nymph, it could be the indicator of love and sex’s welcome on earth. As sometimes, Venus is said to be an earth goddess of physical love, the posture of the nymph is also welcoming this trait of Venus to the earth.

Already mentioned in La Fornarina by Raphael, the naked left breast and Venus’s attempt to hide it with her right arm is a symbol of divinity in Classical art. Thus, unnecessarily representing the nature of goddess, this gesture represents the divinity of the characters as well as the very instance.

Other symbolism are the representatives or the emblem of goddess Venus herself. The floating roses in the air and the branch of myrtle in the neck of the nymph are the symbols of Venus. The ride of a sea-shell puts Venus similarly important and precious to a sea pearl. A shell was also a representative of birth and fertility in renaissance symbolism. The tree in the background is allegedly an orange tree.

Venus is standing in the classical style of Contrapposto, which was used in many sculptures and paintings during the renaissance. It is a style of standing with a weighing the most of the weight of the body on one leg. The Most famous contrapposto sculpture is David by Michelangelo.

Even though the stance of Venus according to the Contrapposto style is correct, Venus is leaning too much on the right side which is improbable in the real world situation. She would probably fall down. Also her feet at the very edge of the Sea-shell is also very impractical as she would easily tip over the sea-shell in the real world scenario.

If we zoom in enough, the eyes of the wind-god also seems a little distorted and uneven to each other. The nymph reaching out to welcome Venus, isn’t flying and still her legs are shown just like the legs of flying god and goddess whose feet has no weight to carry and are hanging down.

Though, unseeing theses little inaccuracies, the painting is a masterpiece from the renaissance time. It has gained popularity in recent times due to its mythical importance. It is around 9 by 6 feet large, made with tempera colors on a traditional canvas. It currently rests in Galleria degli Uffizi, Florence, Italy.

One Response to “The Birth of Venus by Sandro Botticelli”