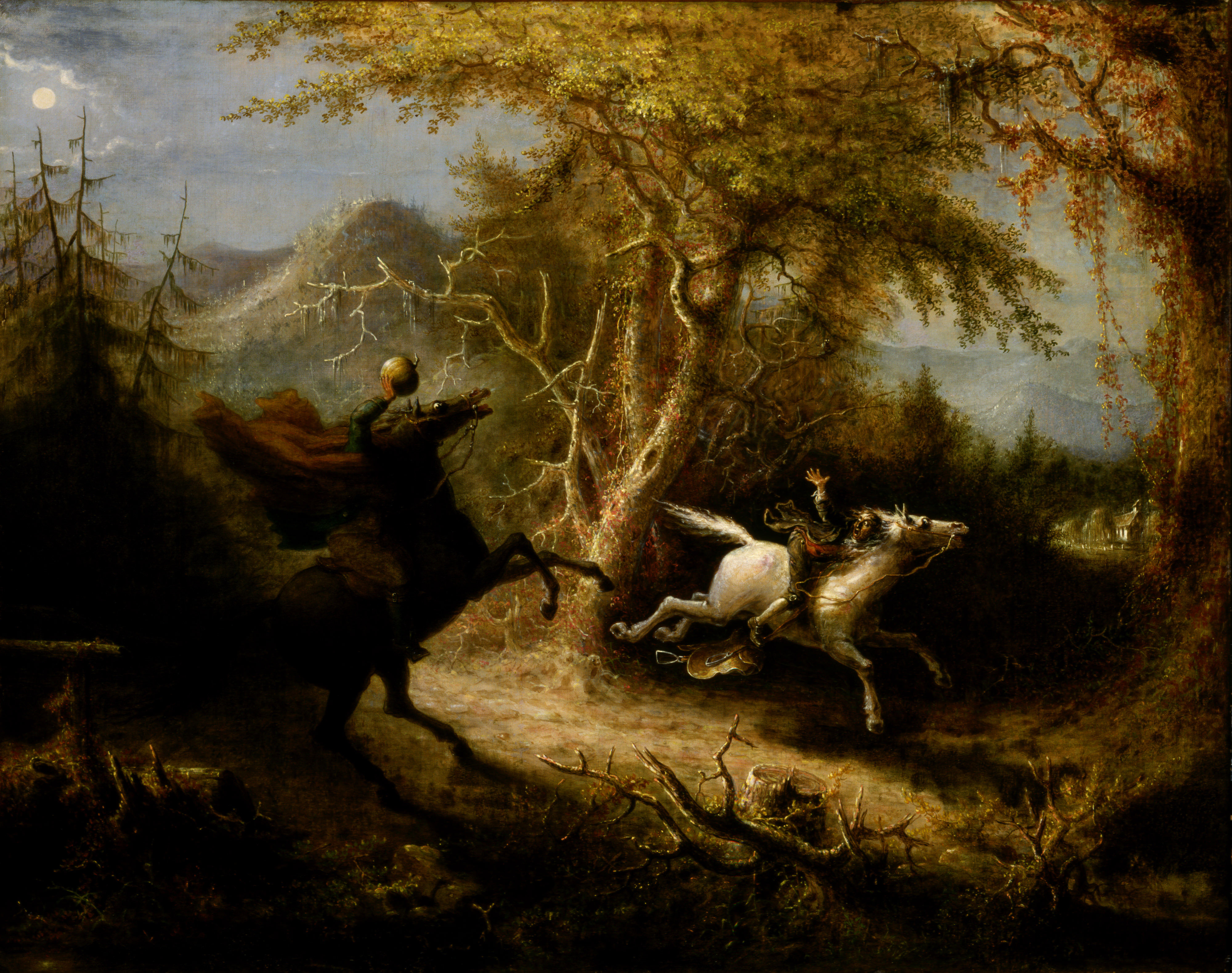 American painter John Quidor has depicted a famous scene from the short story collection The Legend of Sleepy Hollow by Washington Irving. The story is about a girl who is sought by two men. The ill-hearted person doesn’t get the girl at the end and on the return to his hometown, he gets persuaded by a ghost of a headless horseman in the haunted jungle on the road. The painting above is the representation of the moment when the person sees the headless horseman for the first time, gets frightened by the sight and tries to pace away on his horse.

The physical size of the canvas is near to 3 x 2 feet. The large canvas allows the artist to insert enough details. Just like the story narrates, the environment is of night with a full moon in the sky on the upper left side of the painting. The full moon is lightening things enough to see clearly. The area is of the haunted jungle in which many ghosts lived. The ghosts were the victims of different wars in the past.

The composition of objects draws the viewer’s attention towards the main subjects, both horsemen. Horseman on the left is the ghost called ‘headless horseman’ who lost his head by a cannonball in the war. The whole jungle is haunted with similar ghosts but they never harass good-hearted people. And as the story reveals, Ichabod Crane wasn’t much of a hero as he tried to get the girl, Katrina with ill-intention of getting her father’s wealth. Another man called Brom Bones was also in the competition to get the girl.


On the right is the character of the Irving’s story, Ichabod Crane who is going back to his home. The house depicted at the end of the road on the left side of the painting could be understood as Ichabod’s house as he is headed in that direction. Crane looks frightened by the sight. His eyes are popping out and with the mouth open wide he is also screaming to see such a horrific sight. He almost looks traumatized. The saddle has fallen down to near to his legs and even the white horse he is riding upon is screaming in the fright. The pair has already started to run away. Unfortunately for Ichabod, the next day, his whereabouts were a mystery except the horse, the saddle and the shattered pumpkin which the headless horseman is showing up in his hand. He is actually trying to throw at Ichabod.

We could see a similar concept of headless horseman in many other American and English folklore, legends and storie. The latest one is the Nearly Headless Nick from the Harry Potter book series. The base concept looks quite similar in both character’s histories.

John Quidor was a painter of historical and literary subjects. He made many other paintings from the same story and got popular among the readers of Washington Irving and also in painting community.

This 19th century oil painting and the story itself both have become historical in the American culture.