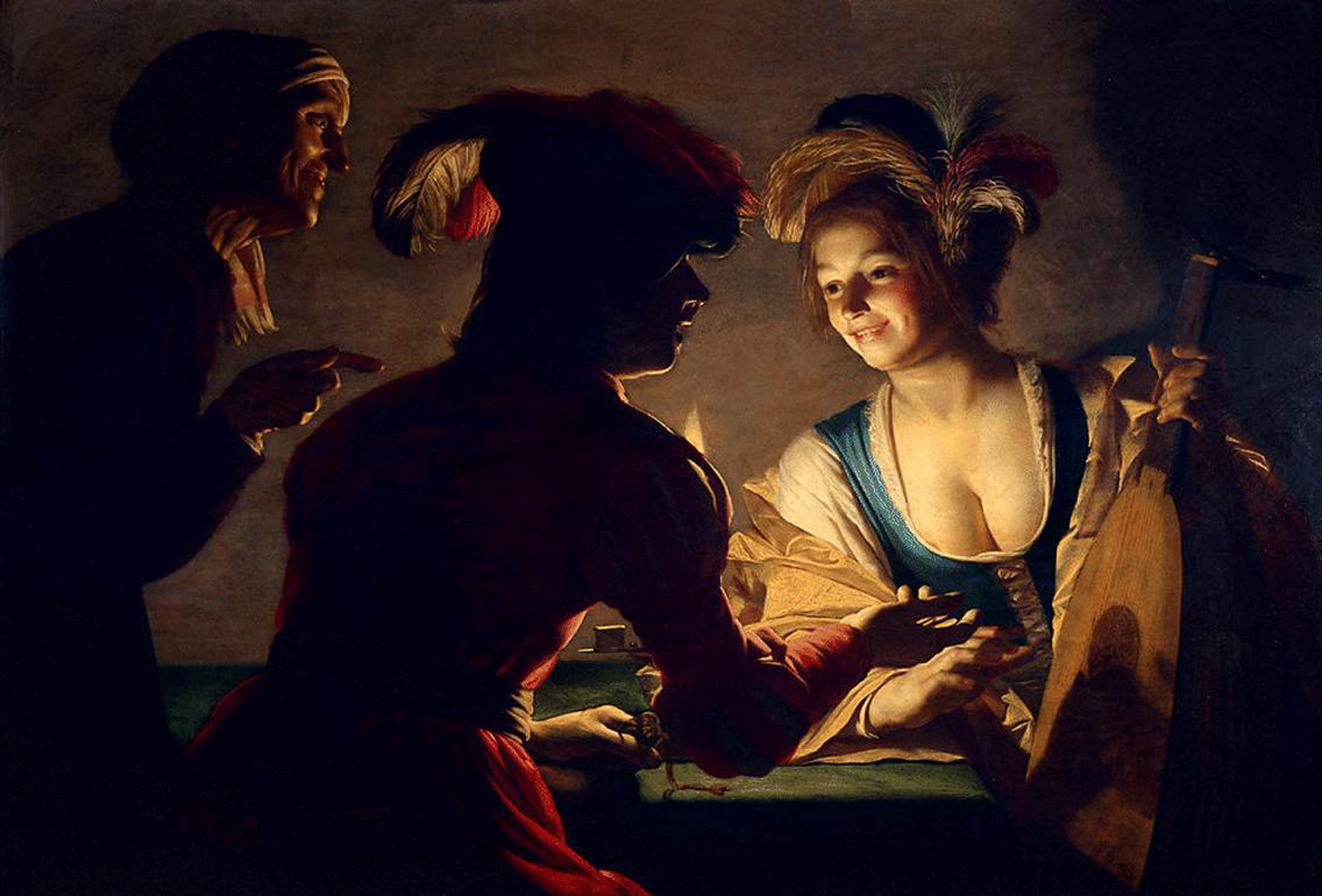 Painters often times try to capture the everyday event or a particular custom of the society. Here is one of such painting in which the Dutch painter has captured a moment in which a woman, a matchmaker, is approached by a man with money to get what he desires. The old man on the left seems to be the person who has bought the rich man to the lady matchmaker.

There are two ways to interpret this painting. But first, lets understand the symbolism.

The painting has only one element of symbolism, the lute. The lute in matchmaker’s hands indicates love, sex or woman genitals based on the context, theme or subject. Use of Lute in paintings during the Dutch Golden Age was prominent. And it also seems to be an object often seen in the settings where love or sex is the main theme. Whether it’s A Luteplayer Carousing With A Young Woman Holding A Roemer by Hendrick Terbrugghen oil painting from 17th Century or the lute used in In the Harem by Filippo Baratti and many other paintings including lute as a prominent piece in the painting, we can tell that artists over the time has somehow related lute with love or sex in the paintings. Though, it’s not necessarily the case for every painting as there are uses of a lute in portrait paintings as a prop, but in aforementioned scenarios from the 17th century, a lute is present element every time.

In the current painting, we see the similar style. The source of light in the scene is only the candle in the middle. That’s a main characteristic of a chiaroscuro painting technique in which, most of the time, there is only a single light-source to lit up or explore the whole scene. You can see paintings with chiaroscuro techniques to understand the technique better.

The two interpretation are either the man with money in his hand is asking directly the comforts of the woman or he is asking her to find a girl for him to satisfy his desires. In the first scenario, the old man on the left becomes the matchmaker, while in the second scenario the woman herself acts as the matchmaker.

Though, the combination of the title and the focal figure in the scene tells us to think the woman to be the matchmaker, yet the inclusion of the old man with a grin (and a good commission) could tell the other story. It’s on the viewer to decide what’s happening in the scene as there seems to be no explanation by the painter himself about it.

The artist has given us a little knowledge about the society of the 17th century and how a small part of the society held matchmakers to suffice their needs. Also, the excellent use of chiaroscuro and symbolism inserts depth in the meaning and style.