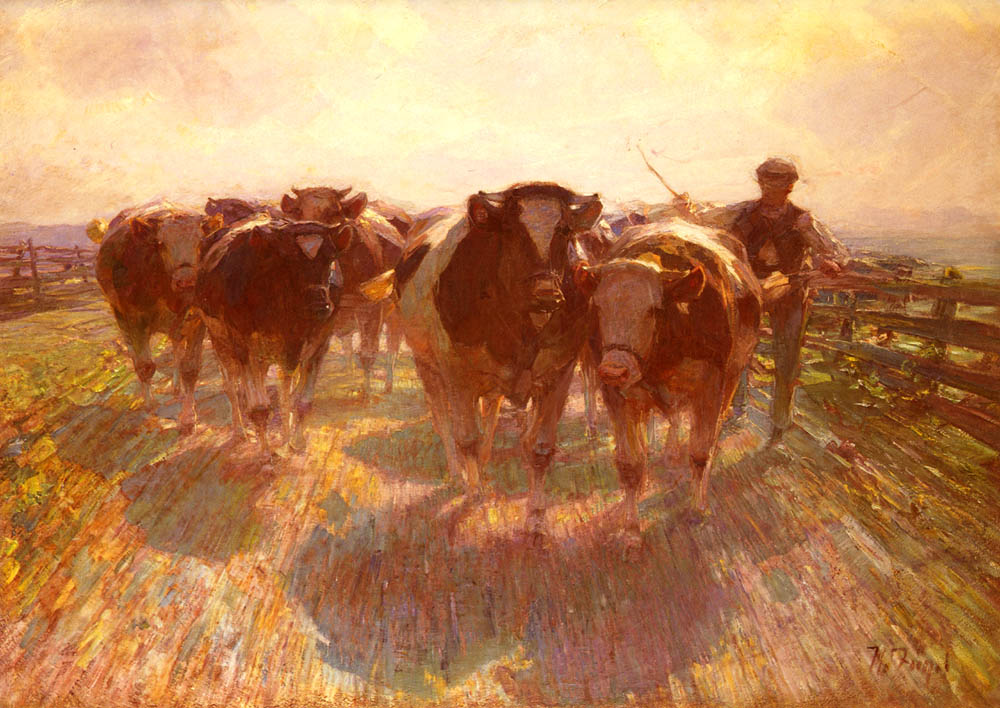 Heirich von Zugel is a well-known artist of Germany for his illustrative works of animals. His paintings are often smeary, just giving a sense of the scene and rest leaving on the viewer’s imagination.

Here in the scene, a farmer is directing a herd of oxen into (or out of) a yard.  Maybe it’s time for graze or they are returning from it. We can’t be so sure just by looking at it because there are not enough elements in the frame. What we can interpret is the time of the day and the herdsman simple life.

Taking animals to the grassy plots, protecting them while they eat and safely take them back when they ate was the simple routine of any herdsman. Though, in-between there could be many works like keeping the yards clean, milking the cows and selling it. it would consume the whole day and is also a tiresome work.


Nowadays, we don’t find as many yards like this living in the natural environment. Instead, we have those ‘cow-farms’ with iron cages with fast, automatic systems where you can never have the fine bond which a person can have while directing the herds towards home or milking them with bare hands. To today’s generation maybe it would seem odd and unhygienic but that was some essence of life back then, which is left only in the villages far from the big cities with no technological improvements.

In this oil-on-canvas painting, Zugel’s simple depiction reminds us those days with closeness with animals. Yes, we have pets like dogs and cats, and we love them. But can you imagine a world where every domestic animal had the similar bond, where human didn’t ruled out them as their food.

Now, we get the term cow-farms exactly.