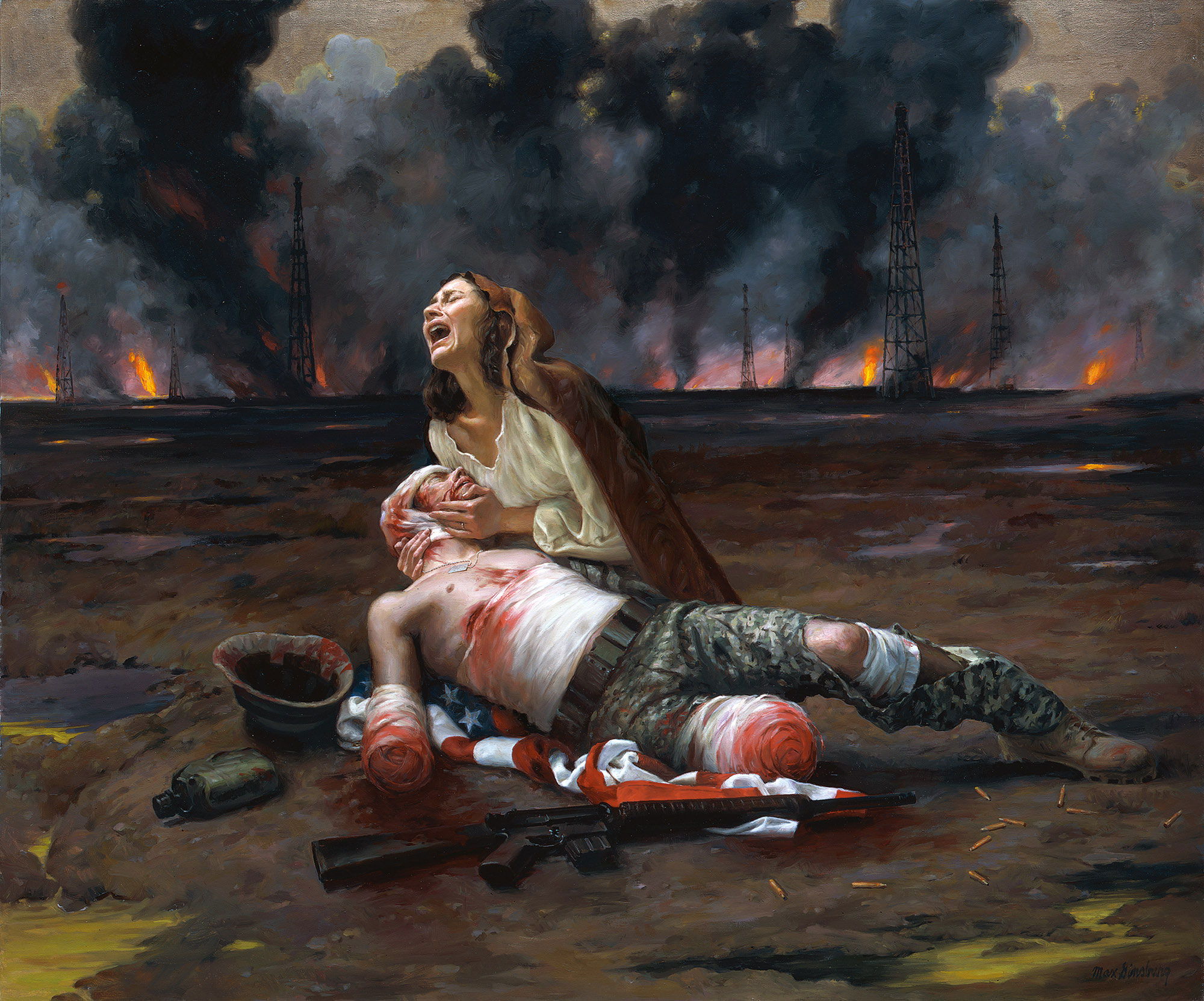 Pieta, as a subject, relays the message of a sorrowful yet pride mother who has lost her son for the sake of humanity and other benevolent causes. The subject mainly became known after the sculpture Pieta by Michelangelo. His Pieta presented Mother Mary carrying lean, weak and dead Jesus in her lap and mourning over his death. Though, the artist intended to represent the delicate scene where Mother Mary is mourning but at the same time can’t regret her son’s death due to the great cause for which he did the ultimate sacrifice. Pieta represents a mother’s dilemma who can’t decide if she should cry for her son’s death or take pride out of it. And this difficult situation, where a mother is forced to take pride at her son’s death, is faced by every mother of the every martyr.

We can only guess about the difficulty a mother feels, when her son dies for the nation. The nation becomes forever indebted to such martyrs, but the mother is left with the sheer, painful absence of her son, whom she thought nothing else but the part of her own soul. Such moments truly takes the souls of mothers away, leaving them between a dilemma of pride and sorrow for life.

We are not describing the martyrs’ sacrifices in any negative tone or doubting their mother’s will to send their pridefully fighting for the nation; but only trying to reflect a mother’s emotional state when she forces herself taking pride at her own son’s death. She is happy to produce such a brave, integrate and patriotic son, and sad at the same time for losing such son.


The dilemma and the pain is as unimaginable for us as the pain of giving birth and we feel like there is nothing more heart-shattering and painful as watching a mother trying to pride under the mourning tears while saluting her son’s dead body. We feel like that’s the ultimate sorrow one could see.

And then paintings like War Pieta strikes us with the brutalest reality of world where the mother only has screams, cries and regret for letting her son die while used as a pawn by the warlords. Jesus is replaced by a dead soldier who tried to fight for his country even after being fatally wounded. Mother Mary’s seemingly calm demeanour is replaced by a grieving mother who, unlike Mother Mary, regrets her son’s death and the background represents the battleground.

Here, the crying is for the deep regret for the lose and deceit, for knowing that it was no noble cause that her son died for. Cry is for the soldier’s amputated hand and leg, which are temporarily dressed enough for him to come again and do whatever he can do with the other leg and hand. It was the utter disrespect and exploitation of a true soldier’s patriotism. The helmet filled with the soldier’s blood, in a sense, is the soldier’s offering for his country. He is lying on his country’s flag, showing his own personal cause for why he came on the battleground the second time with an amputated body. The war is over. The background is on fire (also representing the purpose of the war) and the soldier’s body is left disrespectfully.

Thus, instead of recreating the real situation on the battleground, artist has depicted the scene in more symbolic manner using every object carefully and meaningfully. Overall, the dead soldiers represents the patriotic American Army which fights with its last drop of energy and is ready to become martyrs. The battle ground represents the abundance of ignorable wars initiated for political or economical reasons and not for a noble cause. While the crying mother is reflecting the whole America’s mothers who realizes this real truth of wars and grieves about how their sons’ patriotism and loyalty had been wrongly used.

Thus, with the same posture and settings, the artist has cleverly changed the whole message to today’s reality. He is trying convince us with the truth of war that the wars are carried out immoral principles and the patriotic soldiers are offering their lives unknowingly for those immoral political and economical causes.