“If you want to know all about Andy Warhol, just look at the surface of my paintings and films and me, and there I am. There’s nothing behind it.” 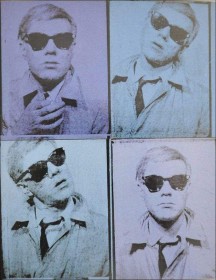 He said this in an interview. But, you have to dunk your head into the artist’s life to know him better.

He was nicknamed as “Pope of Pop”, ‘bellwether of the art market’, in modern times he is one of those artist whose art is being sold like hot cakes of a famous bakery. They are buying his art like crazy for millions of dollars. Recently, in an auction in 2009, it is reported that Eight Elvises has become his most expensive painting of all time with a tag of $ 100 million!

It is possible that you have seen his work before as well as the similar art-work called Turquois Marylyn. It represents Marilyn Manroe’s Polyptych work with different colors and backgrounds, most of which are vibrant colors. These works were defined as the Pop-art; a new genre which began around 1950 in UK and USA.


This was a totally new kind of representation at the time. Polyptych is a known practice in paintings, in which multiple canvases are used as one canvas to produce a big picture or they would be used as pictorial allegories for events. But here, putting a same image with various colors, styles and keeping it attractive to view was a total new thing, which caught up a gradual sensation.

The style of representation perceived in above images was unprecedented and people liked it. Around 1950 he started to hold major exhibitions of his works. In his book POPism he said: “When you do something exactly wrong, you always turn up something”. That was true. His works turned up the pop world with new sensational depictions.

After 1960, as his fame rose and money started to roll in. His fields of arts gradually widened and reached more costly fields like movies, music and books. To produce those works, he established his own studio probably in 1962, called “The Factory”, in which he would produce more than 60 films and around 500 short black-and-white screen tests. This adventurous detour gave him the opportunity to try his ability on camera. Though, most of his films were mediocre and sometimes mundane being one continuous shot of particular actions of the character. Such movies shot by him were Sleep, Blowjob (full movie is around 35 minutes long), Empire (full movie is about 8 hour long), Eat, etc.

Well, the movies which were taken note about by the critics were the Andy Warhol’s Dracula, Vinyl, Andy Warhol’s Frankenstein and Chelsea Girls.

Warhol superstars, the popular term got famous, due to Andy’s own declaration of his actors/actress as the Superstars. Though, most of them didn’t come out as a real superstar. It was this time, when he said his famous quote “In the future everyone will be famous for fifteen minutes.” It turned into the abbreviation of “15 Minutes of fame” in modern times. Another thing related with the phrase is that the artist’s show was also called as ‘Andy Warhol’s fifteen minutes.’

The Bad Assassination, the Good Consequences

Do whatever you can, but once you get rich and famous, controversies are like the mandatory things you have to compulsory bear even you are willing or not. That’s the fact, the history of most famous celebrities tells us. Maybe one day, controversy will become synonym to celebrity.

In Andy’s case, the controversy was not about a shoes being thrown upon him or not about the real fact that he was Gay (that’s another controversy). Actually, the biggest upheaval of his life put a sizzling hot bullet into his chest making its way through his lungs which he remembered as “a horrible, horrible pain, like a cherry bomb exploding inside me.”

Yes, someone tried to kill him on intentions. Out of blue, without any apparent reason, someone just came and put a bullet in his chest and later on presented herself to the police quoting ‘he had too much control over my life.’

Actually, an actress come writer Valerie Solanas was unsatisfied with him after the minor role in Andy’s movie I, a Man. Though, she got pissed off when a script she gave to Andy got misplaced. Though, one or two incidence can’t make a person to shoot somebody. There might have been a grudge building up inside her from the beginning which encouraged her to take the last step. She injured Andy with his colleague Mario Amaya who was working with him on the upcoming film. Amaya got very slight injury but Andy had the fatal one. Even the doctors declared that Andy was dead. But when Amaya shouted in agony: ‘Don’t you know who this is? It’s Andy Warhol. He’s famous. And he’s rich. He can afford to pay for operation…do something!’ Doctors tried once again, this time cutting his chest and manually massaging Andy’s heart. As soon as the heart started to work again, the miracle happened. Because, technically, Andy got reborn! Because when Amaya was shouting at the doctors, Andy was technical dead for about 90 seconds!

Well, he survived the attack. No one would count a bullet penetrating one’s own lungs as a good thing, neither did Andy. But the attack brought a huge limelight upon him and his artworks which were selling for $ 200 a piece skyrocketed to $ 15,000 overnight! Thus, the bullet he took was the key of his immense fortune he collected in his later years!

Though, Valerie Solanas didn’t leave him alone after that. She called him demanding $ 25,000 cash, her S.C.U.M. manifesto to be published in Daily News and her appearance on Johnny Carson’s Tonight Show. Police once again jailed her raising the bailing amount to one hundred thousand dollars.

If you look upon his work history, the major selling has happened after the murder attempt, making him one of the most expensive painter of all the time ranking with other artists like Pablo Picasso and Vincent van Gogh.

In the list of the most famous works, some titles are eight Elvises (shown below), Turquois Marylyn, Campbell’s soup canes, skulls, statue of liberty (1962) self-portrait (1964).

His death on February, 1987 even raised the price of his art-piece to another level. But, now he was not there to enjoy the fame and wealth. Though, being a respectful inspiration to modern Pop artists he will be remembered as the Prince of Pop.

A little contradictory sentence by him to mention at last:

“An artist is somebody who produces things that people don’t need to have.”