Nicknamed as Fou Rou (Crazy Man) in locality, Vincent van Gogh was one of the six children of Theodorus van Gogh and Anna Cornelia Carbentus and born in Groot Zundert, Netherlands on 30th march 1853. He was the oldest child of the family and named after his grandfather and a stillborn brother before him. In his later life he gathered mental illnesses like schizophrenia and clinical depression, due to which is suspected, he once cut off a portion of his left ear and ultimately in 1890, came to his death by a gun shot on his chest.

His work encompasses different types like landscapes, portraits, still-life and some gloomy portrayals like head of a skeleton with a burning cigarette maybe referring to his mental depression of his later life.

In present times, Van Gogh is put in the every list of the genius artists. Maybe he had some strife with his mind, but the same mind produced the art which ranks in both segments of highly acclaimed and highly-paid art-pieces. But instead of knowing just about his revered paintings let’s have a quick look of his entire oeuvre divided by his work-style.

Aside from his mental illness in later years, most of his works represents a sane, thoughtful and creative artist who portrayed the beauty of the world. He produced more than 2000 art-works mostly in just a short time span of 10 years ranging from 1881 to 1890. His subjects in the paintings varied in this period.  At the beginning of his career the subjects of his paintings tended more towards to natural beauty, people and different locations. They were filled with fine observations of genre. Though, there you could also find one or two pieces (At Eternity’s Gate AKA Sorrowing Old Man) with dark portrayals of depressed figures. Maybe those depress-themed paintings were the clues of his stumbling mental conditions appeared later on.


Later one, after his shift to Nuenen, he was attracted to draw people working on weaving machines. His other interest during the time was the peasants working in his area. The outcome of the years of researching on the peasants was The Potato Eaters in 1885, which was acclaimed well in community and was considered as one of his major works in earliest times. It was one of the three paintings which were stolen in 1991 from the Van Gogh Museum. His other notable works during the time were Still-life with straw Hat and Pipe, Still-life With Earthen Pot and Clogs and some portrayal of woman sewing. 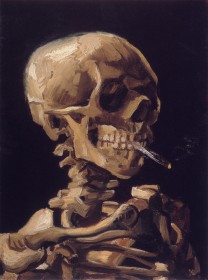 Skull of a Skeleton with Burning Cigarette

Before that in early times of 1884, he was much more attracted towards the still life paintings mostly depicting bottles, fruits and crockery as the subjects. The bottles as the main subjects were maybe the reflection of his drinking habits (mainly Absinthe) after his father’s death in 1885. Though, later on he was treated by Dr Amadeus Cavenaile. Well, didn’t get well soon as he gained poor health due to overwork and excessive smocking. Can you relate this situation with the skull painting accomplished by him?

As mentioned above he researched on peasants lives extensively. Thus, to represent all the knowledge he gathered, he painted numerous portraits and paintings about the peasants’ lives.

The next major change in his paintings came in 1886 when he started to draw his self-portraits and produced about 39 of them (one of them is shown at the beginning). Some of them show his one ear with a bandage over it. The reason behind it is the infamous incident in which he cut of his own ear. Though, the highest price for his self-portrait is for Self-portrait without Beard sold for $ 71.5 million.

At the twilight of his life, he got some mastery over his art and developed the technique of Double Square, in which he combined two square canvases and painted one large painting on it. Moreover, in the last years his paintings majorly concentrated on the naturalistic theme of meadows, green farms and villages. That was the time when he produced his vastly known painting The Starry Night in 1889. It is Van Gogh’s most revered and known painting till date.

The official statements about his mental conditions started after the known incident in which he chopped off a part of his ear. It was a neurological attack when he tried to attack on his friend Pau Gauguin but the incident ended with cutting off a portion of his own ear. Though, there are too many speculations about the story because both of them never revealed the incident deeply to public which is called “pact of silence” between them. They agreed to not revealing the incident as Gogh wrote in his letter: “I will keep quiet about this and so will you.”

But people tried to interpret the exact happening with possibilities of them fighting with each-other on some thing or it was the attack of seizure or Gauguin himself accidently cut Gogh’s ear.

Not sure which one to believe, we can at least understand that from that moment he was severely considered as a mental patient. He was admitted to a hospital in Arles where his condition was declared as “acute mania with generalized delirium”. For vernacular understanding he suggested there might be “a kind of epilepsy” is involved. Van Gogh himself accepted that he might have epilepsy. Thus, both utterances gave a backbone to the theory that Van Gogh actually had Epilepsy.

After the first attack, he frequently suffered from the attacks in which once the attack lasted for 9 weeks. That suggests that he was not a normal patient but a serious one.

Now, there is a full list of theories suggesting the different states of Van Gogh’s mental condition ranging from Epilepsy, Bipolar disease to Sunstroke and Meniere Disease and many more. Though, all could have a little bit presence in his mind as the differencing lines between these mental conditions are very thin. 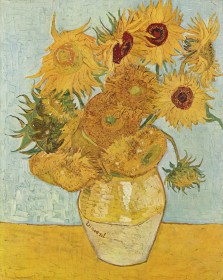 But did this mental illness affected on his paintings or even his choice of subjects changed?

He got his first major stroke in 1888 and as we look at the paintings after that time, I don’t find much difference in theme, subject or colors. Yes, he has more tended towards the greenery of a farm or a village but that’s represents a healthy mind instead of a gloomy or depressed one. Instead, his well-known paintings like The Bedroom, Wheat Field with Cypresses, Vase with Twelve Sunflowers (shown on right) and The starry night were produced after 1888. So, we can’t really understand his mental voyage through years by observing his paintings.

He died on 29th July, 1890 with a gunshot-wound on his chest. Allegedly, due to the worsening mental health he shot himself in a wheat field but didn’t die immediately. After regaining conscious he reached to the inn where he was living at the time and there the inn-keeper called Dr. Gachet who dressed the wound but knew that the case was hopeless. When two policemen came to investigate about the suicidal attempt Van Gogh clearly stated: “My body is mine and I am free to do what I want with it. Do not accuse anybody, it is I that wished to commit suicide.”

He died after two days at the age of 37 shutting off the possibilities of more genius works of art.