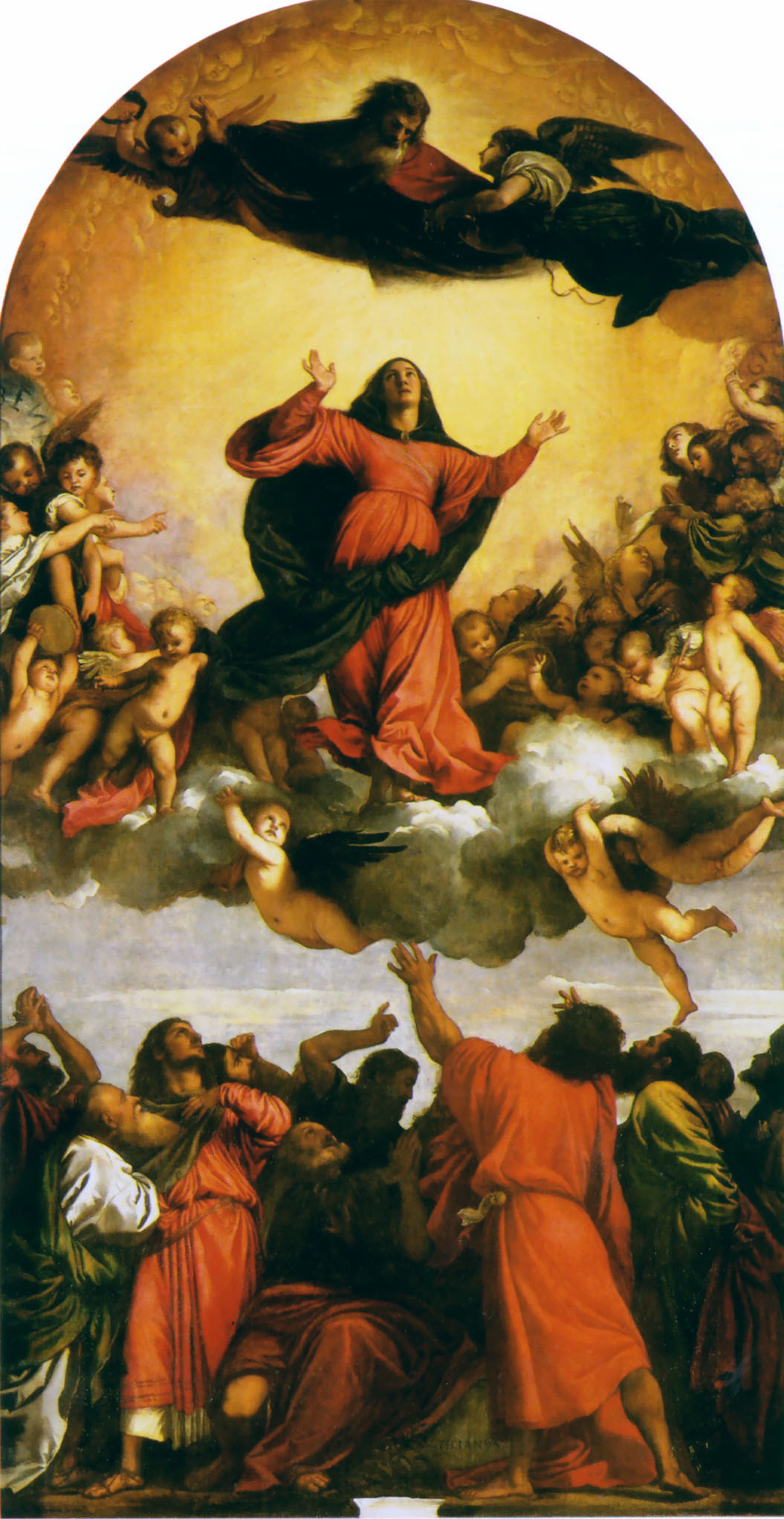 Assumption of the Virgin by Titian

The Assumption of the Virgin (or Assanta in Italian) by Titian is the considerably the best production of the holy instance of assumption by any artist. It is an altarpiece and hangs in the Basilica di Santa Maria Gloriosa dei Frari in Venice. It is one of the important churches in Venice and is solely dedicated to The Assumption. The church also holds possession on other big art pieces such as St. John the Baptist by Donatello and Pesaro Madonna by Titian.

The Assumption was completed in 1518 after two years of work and ranks among Titian’s finest works.

The Assumption of Mother Mary

The Assumption is said to be the end of the Mother Mary’s earthly life. After that she was taken to the heaven with her body soul by god himself – a very similar idea which could be found in many stories of Hindu mythology.


Many artists have tried to depict the holy instance in the most divine and accurate ways to balance between the divinity of the subject and also the earthly elements. From Pierre Puget to Donatello many big artists from renaissance have tried their hand upon the subject. But, the most distinct and well-accepted version was created by Titian, the represented one.

Description and Meaning of Assumption of the Virgin

The whole altarpiece is biggest painting in the city with rough size of around 22 x 11 feet. It looks grand in the church.

Titian has depicted the scene in three parts on the canvas. At the base are the Apostles. Ten apostles are apparent, with their hands raised or looking in the sky towards mother Mary with awe and praise. One of them has joined his hands together in the Namaste posture.

In the middle part, which is the main part in the painting (Mother Mary in Red clothes being the point of interest), is depicted heavily. The flying cherubs with clouds are carrying Mother Mary upwards. There are total of 27 clearly visible Cherubs depicted. Some are playing musical instruments in sacred joy while others are just lifting the clouds upwards. Mother Mary has opened her arms as accepting her Assumption towards god. The background is bright yellow, giving her figure a prominent stance and importance in the whole painting. Contrasting with the bright yellow is the red clothe Mother Mary is wearing. These bright colors and contrasts draw viewer’s eyes to her. Thus, she is being the point of interest in the whole painting.

Above her is a somewhat vague depiction of God. The face and head are clear and visible but the rest of the body isn’t clearly depicted. Two cherubs are flying around Him and hold the crown for the Virgin to welcome her in the divine world.

Upper part of the painting is rounded. There, the indefinite depictions of many cherub faces, fading in the bright yellow light, inhances the divinity and importance of the incidence in the mean of countless divine figures have gathered to witness the divine assumption with body and soul, a rare occurrence.

If you look at the other paintings of The Assumption subject, you would find Titian’s painting being the most appealing and close to the real occurrence. The simple, divided and defined portrayal strikes in mind of people quickly. While other paintings of the same subject are great without any doubt, but in comparison with Titian’s version falls short in the appeal. Only other Assumption with similar significance could be Assumption of the Virgin by Correggio.

This painting also marked Titian as the most prominent artist in Venice during his time and gained him many other commissions and appraisals as well.