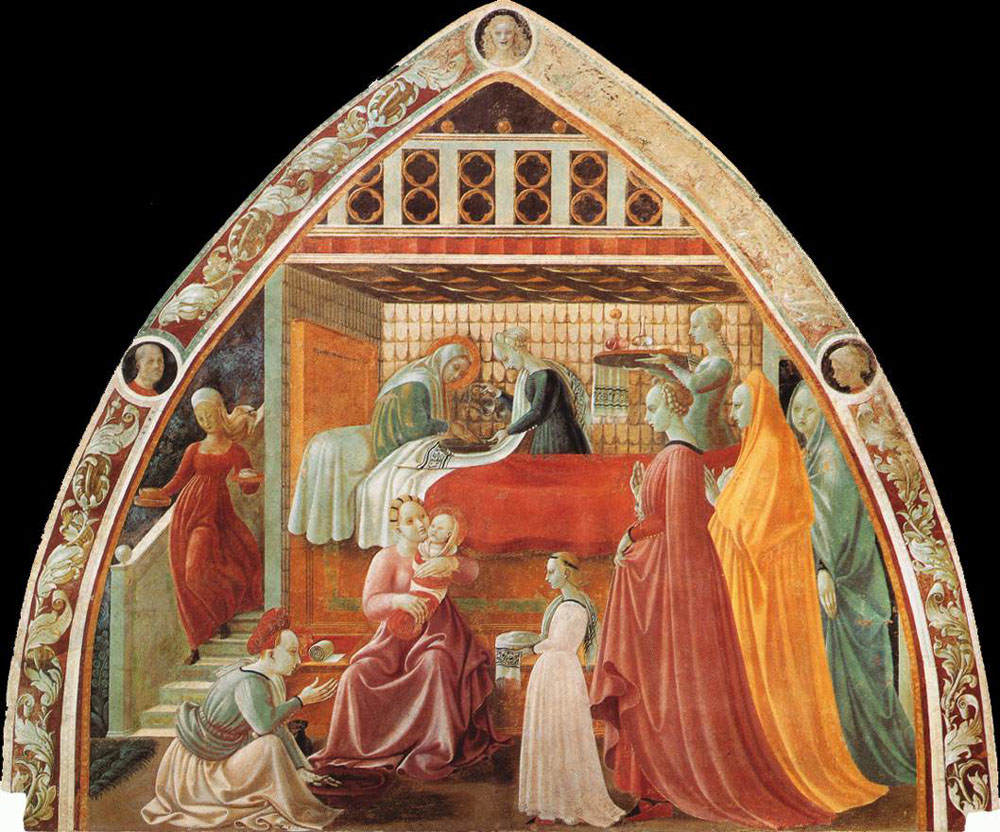 Being one of the most important biblical events, “the birth of the virgin”, or the birth of Mary, is a source of inspiration for many artists in history and contemporary times. Uccelo’s fascination with the Christian stories, and those, which marked his times, often resonate with each other in his Italian old-town frescoes. Here, the birth of the virgin is momentous, in which the kin folk and everyone else around are all up and about to make things easier, better and happier. Notice the lady swishing down the steps with the needed items, and the well-attended room in which The Virgin is getting blessed by almost everybody.

It is easy to imagine why Uccelo’s imagination about the birth of Mary coincides and shows up as something similar to that of her son Jesus. Notice the women-folk who have entered through the right and are evidently presenting a gift of some sort. The decorous atmosphere in the room exudes through the little adolescent pushed forward to make the presentation. Mary is welcome, and so is everyone around her, while the painting remains one of the most historically educational masterpieces by Uccelo.

Paolo Uccelo lived during the 1300’s, which is a period known for its harsh political weather, almost everywhere in Europe. A clash of ideologies across the continental border was already flaring up, and war deaths were probably the most frequent ever in history. In such a period, Uccelo took to preserving Christian beliefs. Even a glimpse of the beautiful architecture that probably surrounded noble Mary is there to be witnessed on the monumental fresco. Her birth is auspicious, and a permanent impression of the event could have helped spread a positive feeling about the world becoming a better place.


The birth of the virgin is of the greatest masterpieces you can find on a trip to Sienna Italy. Just remember to visit this colossal 11’ by 9’ fresco at the Duomo historic wall.

One Response to “Birth of the Virgin by Paolo Uccello”