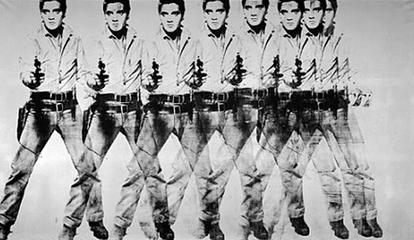 Andy Warhol, the pop master, has used big names like Marilyn Monroe, Mao, Superman, Popaye, Dick Tracy, Batman, and even consumer products like Campbell soup and Coca-Cola. He used their readymade photographs to create a new kind of art-piece out of them. He tried to include every famous subject in his art in his time.

Such big name was “The King”, Elvis Presley. The represented art-work is a publicity still taken from Elvis’s movie Flaming Star. There are total of eight overlapping images of the same still on the large canvas. It is a silkscreen painting produced in 1963.

This is the first painting which brought in $100 million for an Andy Warhol work when it was sold in 2008. The price is recently suppressed by Warhol’s another 1963 work Silver Car Crash (Double Disaster) for $105 million in November 2013.


The painting made him one of the painters whose single work has made more than $100 million at the selling time.