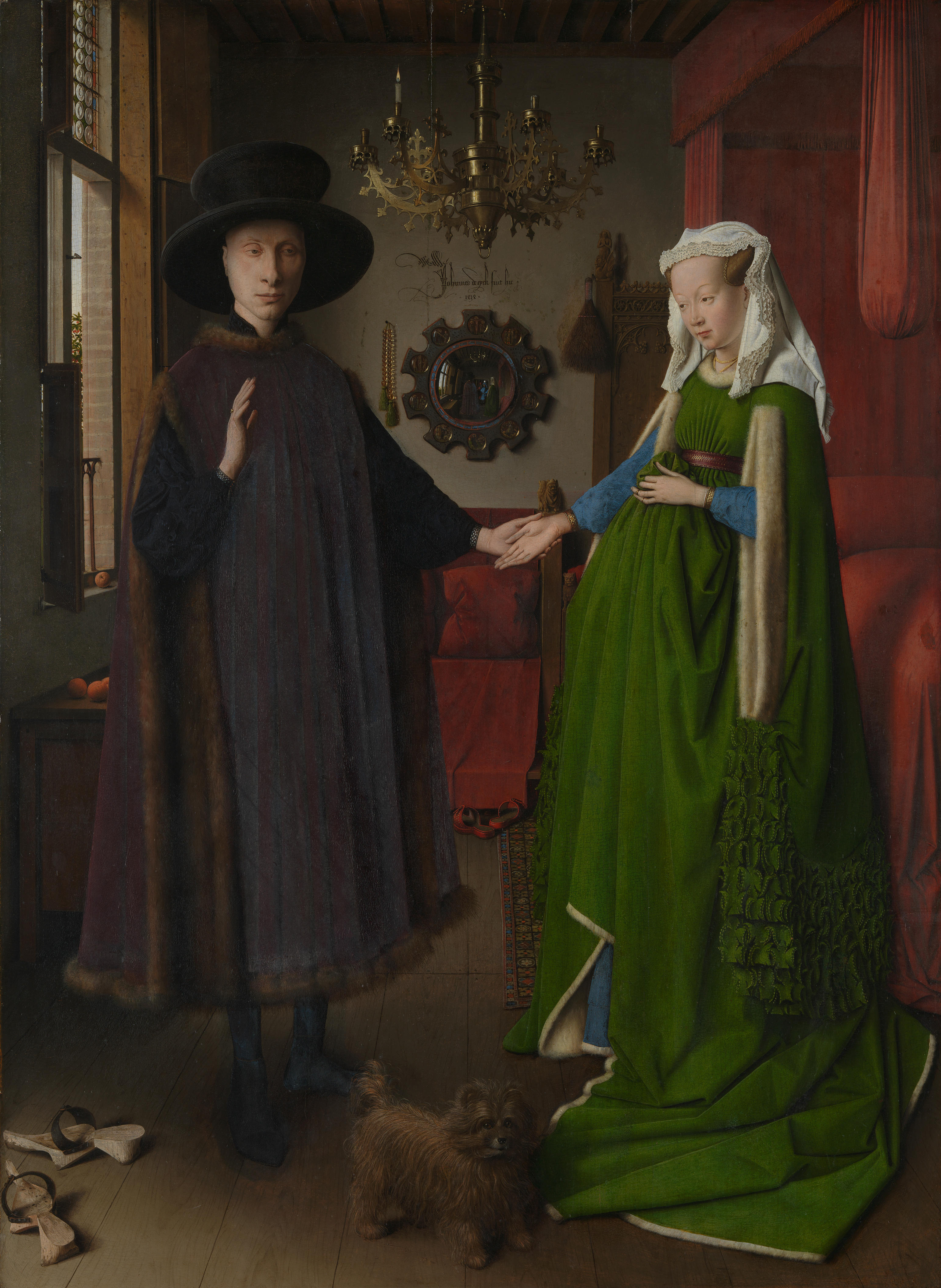 A well-known painting by the Dutch artist Jan van Eyck for the breath-taking depiction and also for the hidden “Easter egg.” The painting is of the Italian merchant Giovanni Arnolfini and his wife, also commissioned by him to portray his marriage. The genre or the painting has been called as Double portrait or sometimes as the primitive genre painting after renaissance as it depicted a marriage – a real life, “normal” incident.

The room is presumed to be merchant’s own house in Bruges. The dog at their feet is the early breed of today’s Griffon Bruxellois.

Most historians take the double portrait as the wedding scene or the representation of their marriage. There are some alleged proofs to support this claim.


Man standing with his right hand raised is said to be the pose in the contemporary times pose while taking oath of marriage. He holds her hand with in his left hand, which is also an affectionate gesture towards her. Though, as he used his left hand, speculation are that, the marriage was a morganatic marriage – marriage with a lower ranks woman.

The facial expressions of the woman also states about her passion and affection for the man, which could be generally accepted as the affection occurring after marriage or in love.

Dog in front is the symbol of loyalty or sometimes it is taken as the symbol of lust. Two pairs of removed shoes are the indicators of the passion for the physical love in 17th century Dutch art. One pair is on the left hand lower corner while another red colored pair (probably wife’s) is apparent near the chair visible between the couple. Oranges on the table near the windows on the left resembles to the purity, divinity and innocence reigned in the Garden of Eden before “The Exclusion”. Another fruit is cherry barely visible through the window. It is symbol of love.

Chandelier hanging from the ceiling has total of six stands for candles. But, only one is lit. A burning candle is a symbol of “sensory pleasures”. Though, many believes that in the current painting which represents the marriage, the single lit candle is the ‘eye of God’ or ‘presence of god’ as a marital ceremony happens in a church in the presence of god. Though, in the picture, it is very difficult to define the scene as a marriage scene or the scene of profane love as symbolism could be interpreted in both ways and theories overlaps each other.

Colors play a major part. The bright green of wife’s clothe stands for hope while the white cap is symbol of purity. Red chair, curtains and bed resembles to physical form of love. Husband’s clothe’s dark violate represents the royal-ness as the man was one of the wealthiest person in the city.

Pentimento is the name for the remarkable alternations an artist does during the painting procedure. Sometimes the changes could be small as alteration of finger positions but sometimes whole characters gets deleted from the scene, changing the whole theme of the painting.

In Arnolfini Wedding, there are some alterations found through infrared scans in the underdrawing. Allegedly, in the earlier version the placements of the figures were more nearer to the bottom edge and thus husband was longer than the current length. There were also changes in hand gestures and placements of some other objects.

Importnace of the convex mirror or the Easter egg

The convex mirror is highly detailed object. The outer part of the round frame holds total of 10 miniature paintings. Those miniatures represents the life events of Jesus Christ.

Though, more interesting thing is the reflection in the mirror. After zooming in enough, you see four figures in the reflection against only two apparent to us in the whole painting. Thus, though the term of “Easter Egg” was coined in 1970 during a game development for Atari, the idea and concept seems to be much older than that. The present painting is the proof. The reflection also reveals some more details of the room, unable to perceive in the real room.

artist David Hockney and physicist Charles M. Falco came up with the thesis that the progression in art after the renaissance time is mainly due to the use of the optical aids (such as Camera Obscura, Camera Lucida, Black Mirror, etc) artists got. Not because of any new art movements.

This painting stands as one of the main proof of their theory as the painting holds highly detailed depictions, which both of them claims to be impossible just by observing scene with naked eye.

On the wall above the convex mirror is the real signature of the artist with date of 1434 – the year in which painting was finished.

This much celebrated masterpiece from Jan van Eyck is a popular painting encouraging parodies in the modern times. It is currently in the showcase at National Gallery, London.

One Response to “The Arnolfini Wedding by Jan van Eyck”