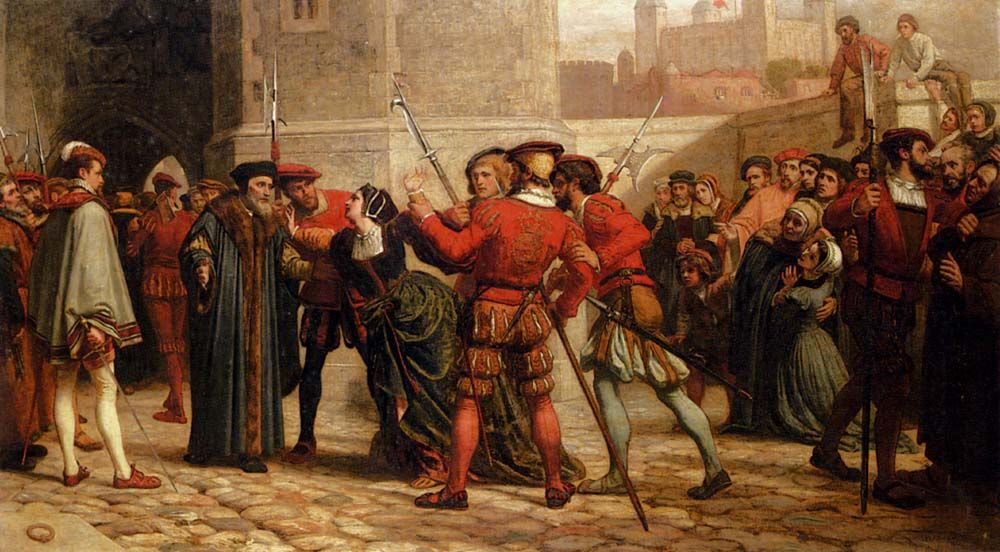 Well-recognized for his oil-on-canvas problem pictures (a painting with ambiguous meanings) William Fredrick Yeames depicted this picture titled as The Meeting Of Sir Thomas More With His Daughter After His Sentence Of Death in 1863, more than 300 years after the death of Roman Catholic Saint Thomas More. He was imprisoned and later beheaded for the refusal to take oath as per the Act of Succession in declared in 1533. Act described yet unborn princess Elizabeth as the true successor of the crown as the princess Mary was declared a bastard. Thomas More refused to take the oath because he saw anti-papal powers of the parliament about the religion. Sir Thomas’s firm belief brought the imprisonment and later death.

As it is depicted here, Sir Thomas’s eldest daughter Margaret is trying to meet her father as a soldier is stopping her from. The reason William Yeames decided to depict this moment with his daughter could be interpreted as the strong affection between father and daughter.

The reason for the strong affection between the father and daughter could be found in Thomas More’s independent and before-the-time mentality. He was an open supporter for women education and gave similar classical education to his daughters like his son. Moreover, being a foster child, the eldest daughter Margaret had more adherence towards her father.


This bond is finely depicted in the scene by William Fredrick. He has considered all the important elements in the scene. The old-aged More’s spread hands to meet his daughter for the last time. On the right side of the corner we can see rest of the family, in which the elderly woman is probably More’s wife and their daughter and son with her.

We can imagine how tragic this incident is as More was revered later for his firm standings on this thoughts and righteousness. A social critic and humanist from renaissance era uttered this words after More’s death ‘Whose soul was more pure than any snow, whose genius was such that England never had and never again will have its like.’

It’s ironic that the inventor of the word Utopia (name of his novel, meaning an imaginary world where everything is perfect) was killed by an imperfect decision.