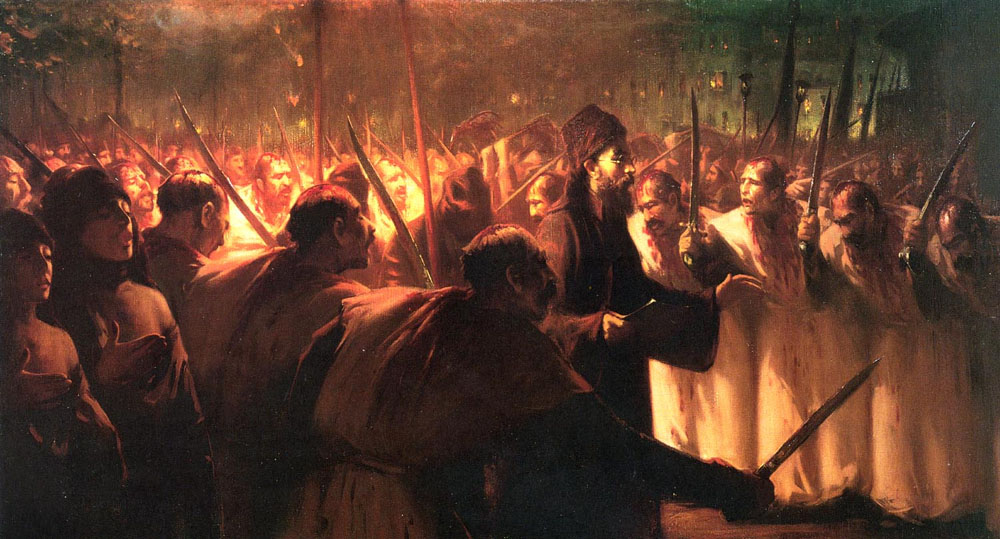 This vivid representation of the 10th day of Muharram is achieved by the well-known Italian painter Fausto Zonaro when he witnessed the ceremony during his stay in Istanbul. He drew most of his picture reflecting the culture in various views and scenes.

The current painting is a patent display of that important day for Muslims (Shia) community. The 10th day of Muharram or the Ashura Day is remembered as the day on which Hussein Ibn Ali was martyred in the battle of Karbala. Hussein was an Imam and due to his death Shia Muslims mourns on the day. But, this mourning doesn’t stop at despair but as a demonstration of their sheer dejection Shia Muslims often do flagellation by hurting themselves with lashes or swords – swords being a symbol of the main weapon of the battle. To see the ceremony in reality is not an amazing experience as there are women crying and men hurting themselves. But, it reflects the respect and adoration Muslim community carries for their martyr even after nearly 400 years of the battle.

In this painting, the Ashura Day is represented with very strong lighting and composition of people in the frame. The Shia Muslims are flagellating themselves- by hitting swords on their heads. That is an intense way of self-persecution. But bearing all the pain they are determined to their faith. In the middle, an imam is walking with a copy of Quran in his hand presumably chanting the verses out of it for the religious faith. Two people on the left also seem cooperating with him. A palace-like building in the background could be one of the buildings Zonaro stayed or the real place where he witnessed this ceremony.


We can understand why he was so influenced by the culture and prompted to paint this horrific painting in his words: “After witnessing the horripilation procession (of Tatbir) I wish I were able to meet this man they mourn for”.

A big mob with swords hitting themselves, crying out for the death of their beloved martyr and seeing the bloodshed on every person is quite an impactful phenomenon to experience.