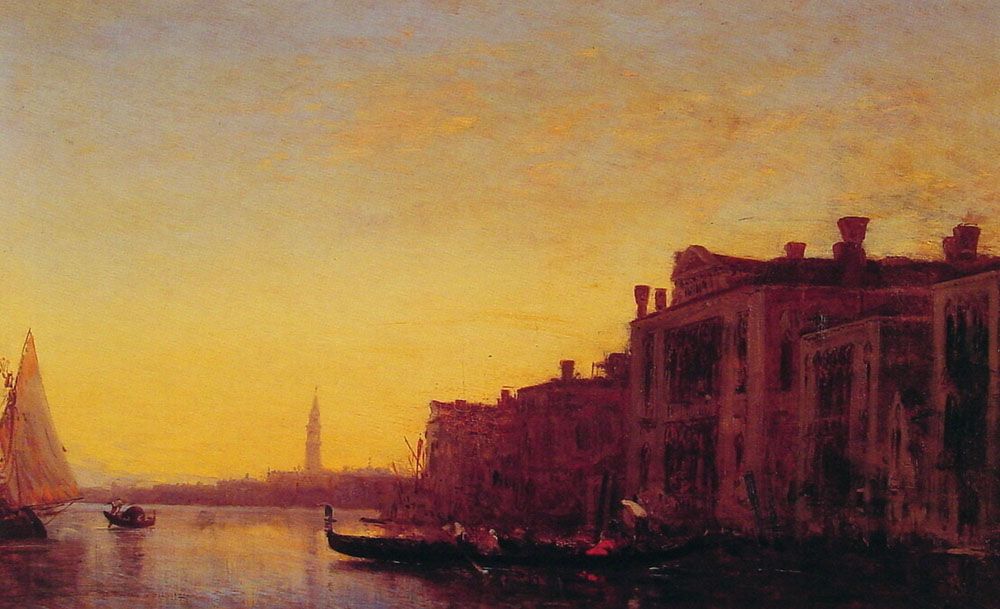 Subtle description of the city of Venice concentrating mainly on the Grand Canal the painting silently adheres the grandeur of the city. Felix Ziem’s series about his favorite city discovers various dimensions and places of the city in artistic way.

The glory of Venice is wide-spread in the world. Just like Vatican City, Venice also comprises historically noteworthy building. But unlike Vatican’s religious impression on the visitor’s mind, Venice enjoys nickname of a romantic city. Many visitors on their romantic journey visit Venice and take a ride on the Gondolas – the small iconic boats of the city which travels through-out the canals. The boats in the painting are the same Gondolas without which Venice’s depiction would be considered incomplete.

A routine of placing elements in certain way can be derived from the Ziem’s Venice series. He always puts important building on the right hand side while gives a slight glimpse of the boats looks into the frame from the left side while the middle area is always devoted to the vast water. The far background would always show up the most significant scenes of the city which a viewer can quickly get the sense of. In the current picture, the tower in far background is the same tower standing in the Saint Mark’s square.


The Grand Canal under a lit sky departs the city in two parts and the people majorly depend on it for the travel. It is like a main road of a regular city just replacing the cars with boats and roads with the watery canal. Well, maybe it could sound nothing more intuitive but sliding your head out of a windows and having the scene of a small river surrounded by buildings is a view anyone would pay to live for. Maybe that uniqueness allured the artist towards the city and bringing him back again and again every year to explore the city more.